Trends and Insight 363 Add to collection 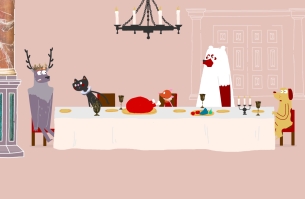 Following on from the success of the Globe Playgrounds launch, Persistent Peril were asked to excerpt a scene from five classic Shakespeare plays, and create a series of short 40 second films.

Working with the wonderful digital and education team at Shakespeare's Globe, Persistent Peril created a cast of characters to inhibit the Globe’s new educational space, ‘The Globe Playground’!  The space features animations, games and activities for 5-11 year olds.

Persistent Peril created a full character bible so that their furry cast could be used from screen to print. The bible featured facial expressions and poses, colour palettes, ‘how to draw’ illustrations and guides on creating backgrounds in the same style. All of the backgrounds and textures are taken from the Globe itself, along with their fantastic prop and costume department.

The ramshackle company of animal actors each play their own part in the day to day running of the Shakespeare’s Globe. Each Beast has their own skill, whether it’s costume design, prop making or play writing, which aids the creation of the plays they perform. The animals personalties match a different Shakespearian archetype, which determines their role on stage.

Crafting such famous  scenes into fun bite size shorts without dialogue was a great challenge for the team, but we think they did brilliantly, and so did the visitors to the The Globe Playground.

As troop leader, ‘Hemmings’ is responsible for organising the other Beasts. With his soft and gentile nature, Hemmings plays the role of the carer, both on and off stage. Hemmings is also quite bookish, and can often be found with his snout berried deep in the pages of his favourite play. This habit has made the bear very knowledgable and the other Beats often go to him for advice, and with questions about their own roles.

Although a very talented musician, Dekker often finds his part as the Fool is not confined to the stage. His clumsy nature is matched with a kind heart, making Dekker very popular among the other Beasts. Dekker holds a secret flame for Kit, though it it not returned.

Kit makes the costumes for the plays that the Beasts perform. She loves utilising all the different fabrics and textures The Globe has to offer, creating beautiful detailed costumes. Kit’s passion for fabrics is translated onto the stage as her role as the Lover. This archetype suits this passionate sweet natured cat well, although Kit’s heart is reserved for fabrics, not her co-star.

Condell is strong and noble, and he uses his powerful presence on stage in his parts as the Hero. Off stage Condell keeps himself to himself, and can often be found tucked away in a corner sawing and painting new props for the next production.

Perkins the Shrew is small is stature but big in personally. She is not scared to boss the other characters about, she is the only Beast that scares Condell. She loves to dance, and is the Choreographer in the troop. She is very strict when teaching the others their moves, and her little voice travels very far when they can’t get it right.

Slye the Fox is the trickster of the group. This role is present both on and of the stage, as he is often plotting ways he can out smart the others and get his own way. Although big and broad, Slye is actually quite a scaredy fox. If he were to come across a spider, he would get Condell to help him capture it in a bottle (before dropping it on Perkins’ head). As a clever fox, Slye is also the writer of the troop. This is where he displays his more gentle side, as he dreams of playing a more heroic role.