How One Twenty Three West Paid for a Campaign in Meat 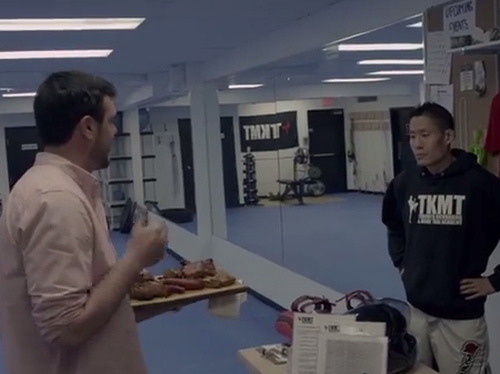 To prove that Montana’s Best of BBQ Sampler event is irresistible, the Montana’s team tried to shoot an entire ad campaign by bartering with BBQ ribs, sausages, chicken, brisket, and shrimp. And it worked.

Created by Vancouver-based ad agency One Twenty Three West, Montana’s surprised real businesses in Toronto by simply walking in and offering a plate of BBQ meat in exchange for goods and services.

“We thought the best way to create awareness of the new Best of BBQ Sampler Event at Montana’s would be to literally bring the BBQ food to people in a creative way,” says Scot Keith, Founder and Managing Director, One Twenty Three West. “It allowed us to create a number of great content opportunities and was a lot of fun to do.”

Over two days of bartering and shooting, they received a psychic reading, an MMA lesson, a manicure, a yoga lesson, men’s skin care products, some new shoes, a haircut, a bouquet of flowers, an area rug, a massage and even a real tattoo.

But the bartering didn’t end there. The entire production crew and the advertising agency agreed to take part of their payment in BBQ.

Chelsea Kellock, Brand Manager at Montana’s says, “This ad campaign proves with real people, just how irresistible our BBQ is.” She added “Hardly anyone turns down a platter of BBQ. Forget about Bitcoins, meat is much more widely accepted.”

The Best of BBQ Sampler Event at Montana’s allows each guest to choose two meats and a side. When they bring more people, they have the option to share more BBQ.

The ads will be airing in cinemas across Canada, on TSN and online pre-roll. Longer versions of the each encounter will be released on Montana’s Facebook page and on Twitter.