LBB’s Addison Capper heads to Stockholm to play with TBWA\Helsinki, Acne, and a monster car-games console mash up 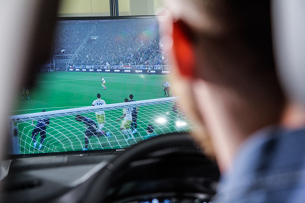 For Nissan’s recent sponsorship of the UEFA Champions League, its agency in the Nordics, TBWA\Helsinki, realised that they needed to produce something that wasn’t just innovative but also placed fans’ entertainment at its heart – after all, the brand’s mission statement is ‘Innovation That Excites’. The result, produced in collaboration with Acne Digital, is a Nissan Qashqai car that acts as a PlayStation 4 controller. By ‘driving’ this hacked car, fans can play Konami’s football franchise game Pro Evolution Soccer. The whole project is neatly summed up by the tagline, ‘A Mission to Drive Football’.

The hybrid car was created by hacking a PS4 controller, opening it up, and adding a microcontroller inside to simulate the button presses, read the car signals and finally connect the signals to a PS4 with a mini PC. There was, we believe, lots of soldering involved.

According to Mikko Pietilä, creative director at TBWA\Helsinki, the idea was borne out of thinking about the unforeseen consequences of the ‘driverless’ car. What might people do in their vehicles when they no longer have to actively drive them? “Project Controller explores what part cars will play in people’s lives in the future and what is beyond the act of simply driving,” he says. “How will people spend their time in cars when they don’t need to keep their eyes on the road? Wouldn’t it be cool if your driving experience could be transformed into something entertaining?"

We headed along to a recent testing day in Stockholm and can confirm that the experience is an enjoyable one for gamers and drivers alike and, despite being a bit tricky at first, extremely intuitive. Joining him on the day were a series of ‘creative influencers’ including three gaming YouTubers (who between them have more than five million YouTube subscribers), technologists, a Nissan racing driver, and gaming and sports journalists.

What’s interesting about the campaign - aside from the fact that you can play computer games with an actual car - is its transparency from the get-go. Instead of keeping the initiative a secret and then doing one big launch, TBWA and Nissan decided to announce their ambitions around three weeks ago, creating more organic and prolonged excitement around it.

Mikko thinks it took real guts for the Nissan client to work in this way. “We had a revelation that we shouldn’t build this in secret and then launch it,” he comments. “We should announce that we are actually doing it. We should make this a quest. We should tell people that Nissan is embarking on this expedition, so please join and follow us.”

Mikko’s creative partner Steve Brown, who is the content director at TBWA\Helsinki, believes the campaign’s transparency, along with its uniqueness, will underpin its longevity. After all it will have to last the length of entire Champions League season, which is particularly crucial for a market like Sweden. “Sweden have Malmö in the competition but realistically it’s unlikely that they will go on to win it. So it’s quite a long bridge to build to talk about different teams and how they’re doing, and just to rely on things like sideboards ads. It’s not going to carry out throughout the season. Instead we needed something to tie everything up. This is a project that really utilises the large scale of the sponsorship.”

Prior to the testing event in Stockholm, TBWA and Nissan had been drip-feeding teaser content on social media and feeding out to the press. Considering that Nissan was the main brand involved, it was the gaming community that really took to it first. But that’s exactly what Mikko and Steve had hoped for in getting the likes of PlayStation and Konami to be a part of a project that already involved Nissan and the Champions League. The hope, now that people can see that the technology legitimately works, is that the tech and automotive industries will also get in on the fun.

During the testing day, all of the creative influencers spent time really getting to grips with the car and giving. What’s really important to note, though, is that everyone present was encouraged to share their experiences, no matter what they thought. If people thought it sucked they were free to say so.

At one point, the YouTubers – who were not paid to be there or obliged to produce any content – set about making their own films with almost complete freedom from both client and agency. There has been much debate about brands harnessing the power of social stars like this, particularly when it comes to product placement within films. However these guys really wanted to be there and share the fun they were having. And it paid off. Their massive social followings, along with that of all the other influencers, led to organic video views double that of initial estimates and five times the reach. In addition to that there were 585 tweets with the hashtag #ProjectController, beating Zlatan Ibrahimović and Fallout 4 (a major game title launched this month) in the trending rankings that day.

A number of the YouTubers’ young fans actually began turning up to the testing site when they caught wind of what was going on. “Many brands would have blown the whistle at that point,” believes Mikko. But in fact, the kids were welcomed and allowed to experiment with Project Controller themselves. “It’s fun when things start to fly organically,” Mikko muses.

The ability to make decisions on the fly like that is also down to TBWA’s relationship with Nissan’s media agency OMD. TBWA\Helsinki creatives sit side-by-side with OMD’s strategists and chat daily to work things out together on both the creative and the media side, and with events like that in Stockholm, the OMD team are constantly on hand to assist. “I was constantly on the phone with them during the day,” says Mikko. “Reactive marketing like this requires synchronization with content and media optimization.”

Despite not being officially tied to Project Controller, Mikko and Steve are under no illusion of the influencers’ power – those kids turning up are tangible proof in itself. “Our biggest content for this campaign so far is what our influencers pushed to their channels – and that’s not even made by us,” comments Mikko. “We don’t want to have any control of that content. They can make whatever they want and push it wherever they want. The content they’ve created has exceeded our expectations in both its positivity for Nissan and the amount of views they have had.”

Steve adds that that aspect of the project highlights brands’ lack of control in the digital age – but also their need to embrace it. “It shows the powerlessness of us and brands,” he says. “If the reaction to today had been negative, Nissan would have come across negative. There is no overpowering the people and their social channels. We need to find a way to communicate and be one of the good guys.”

So where next for Project Controller? The campaign is set for a big launch at the Malmö vs. Paris St. Germain match on 25th November, where attending fans will get the chance to play with it. But as mentioned earlier, the plan is for the campaign to roll out across the course of the football season and really harness the magnitude of the Champions League sponsorship. And then who knows where the technology could end up? As mentioned earlier, the idea’s very essence lies in the possible activities of people in cars when they are driving themselves. But in the meantime, according to Steve, the aim is to get as many people using the technology as possible – him and partner Mikko do not want it to live as a gimmick in a warehouse.

“Controller is something we like to consider as an open source application that will soon be in the hands of the gamers and tech enthusiasts,” he believes. “The project is a very reactive expedition by design. Every piece of content or social interaction in the online world is monitored. We will listen to our audience and if they react we will respond if we feel it serves the audience. This is just the beginning of the Controller.”