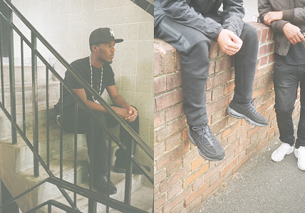 RSA Films collective the Rig Out have teamed with Nike and to make a film celebrating the 20th anniversary of the Nike Air Max 95. The film features an original score from Ninja Tune producers Dark Sky.

To coincide with the 20th anniversary of Air Max 95, The Rig Out headed south to visit four people pushing in their respective art forms. Novelist, an MC coming through the grime ranks and standing shoulder to shoulder with Skepta and Drake; Jetsss, an up and coming DJ playing out across the city and on NTS; Dark Sky, young producers on Ninja Tune playing around the world; and Ryan Hawaii, the Catford-based art dealer who hand paints clothes and is also the mastermind of Neverland Clan. All born around 1995, The Rig Out talk with them about their work and the Nike Air Max 95 - a shoe that they all grew up with and is synonymous with London youth culture. Ninja Tunes artists Dark Sky wrote an original score for the film - influenced by the jungle sound of the mid '90s.