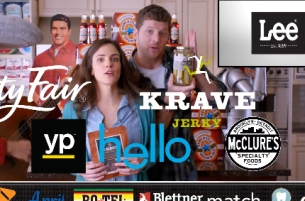 Rather than individually blowing a CEO’s salary on 30 seconds of television advertising, Newcastle called on fellow brands to join forces and make the smartest financial decision possible: to collaborate on the world’s first crowdfunded ad for this weekend’s Mega Huge American Football Game!

The Newcastle “Band of Brands” brings together 37 companies of all stripes to release this groundbreaking spot, which will air during next week’s Exceptionally Expensive Sporting Event. The Band of Brands spot follows Newcastle’s unsuccessful attempt to enter a certain snack chip maker’s crowdsourced Football Game Ad contest with a Newcastle beer ad cleverly disguised as a snack chip ad.

On the heels of that ill-fated effort, Newcastle introduced the Band of Brands concept with a smash-hit online video featuring “Parks and Recreation” star Aubrey Plaza, calling for brands to join the project in exchange for a small contribution. “Instead of blowing Newcastle’s marketing budget, let’s team up to blow all of our marketing budgets, together! That’s called teamwork,” Plaza says in the film.

Newcastle did its best to capture the feel of overblown advertising with all the loveable animals, canyons, cowboys and Americana it could handle – even the obligatory controversial teaser featuring Plaza milking a cow. Because nothing builds suspense and anticipation like an actress milking a cow.

“Our goal here is to make history and sell great beer,” said Priscilla Flores Dohnert, brand director for Newcastle Brown Ale. “We weren’t going to let our tiny budget stand in the way of taking home the Big Game glory for the second year in a row.”

“Not only did we create the world’s first crowdfunded Big Game ad, but I’m pretty sure we just made the cheapest Big Game ad ever,” Dohnert said. “By asking other brands to team up with our brand we are making a statement that Big Game advertising should be accessible to everyone, whether they can afford it or not.”

“Airing a Big Game ad is something I never thought we’d be able to do, but the idea of just tossing our name into Newcastle’s existing work was too good to pass up,” said Todd Fletcher, vice president of marketing of Tessemae’s All-Natural Dressings. “I’m excited for our brand to get in front of fractions of portions of shares of millions of eyeballs.”

Newcastle’s 2014 Big Game effort, “If We Made It,” told the story of Newcastle’s “Mega Huge Game Day Ad,” a spot that was never actually produced. The program – including trailers, teasers, storyboards and a brilliant video starring Anna Kendrick – was heavily praised.

The “Band of Brands” program was created by Newcastle in partnership with Droga5, Fast Horse and MediaVest, as part of Newcastle’s long-running “No Bollocks” campaign, which takes a lighthearted, no-nonsense, honest approach to marketing by shining a light on the silly, stale and sometimes deceptive clichés often found in beer advertising.