How Much 'Wolf' Should a Man Be Showing? 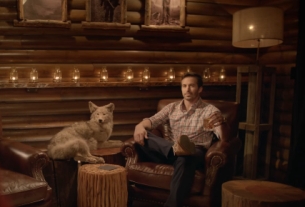 Every guy struggles with the same problem on a night out: how much...er, foliage to reveal with his button-down shirt. Too much and you may as well throw in a gold medallion, not enough and you look like Marty McFly’s dad. Apparel company Johnnie-O introduces the answer to that problem with “The Right Amount of Wolf” from Ignited.

The ad features social media’s Arielle Vandenberg—she of the 1.7 million Vine followers—scoping guys out in a bar. One man buttoned too low is showing Too Much Wolf, which you can tell by the three stuffed wolves he has on a leash. Another man is buttoned up too tight, with a little wolf pup at his feet. The third man has the Right Amount of Wolf: a single wolf chilling at his side for that perfect blend of danger.

That perfect balance, we learn, comes from the Tweener Button, designed by johnnie-O founder John O’Donnell (the brother of the actor Chris, if you pay attention to such things). It hides in the placket between the second and third buttons so you never show too much skin but still look casual.

The campaign is the first for the Santa Monica-based johnnie-O, a company that specializes in “West Coast Prep” clothing. It’s one of the first big campaigns for El Segundo, Calif.-based Ignited by CCO Eric Springer, who was one of the creative minds behind Volkswagen’s Super Bowl classic “The Force.” The song is by musician Drew Cole.