How MPC and Heineken Turned Back Time for Jackie Stewart

Behind the Work 2.0k Add to collection 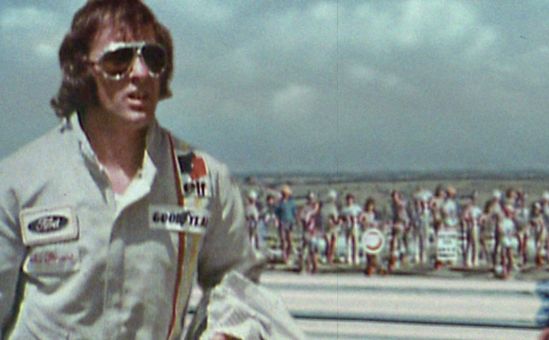 This new Heineken ad is all about leading by example. In it, Formula One driver Jackie Stewart is shown making the smart decision not to drink before getting behind the wheel. Thanks to some VFX magic from MPC and clever direction from Gary Freedman, we get a glimpse of Stewart at key moments from his illustrious career.

Influenced by Roman Polanski’s documentary ‘Weekend of Champions’, the spot sees Stewart (a vocal racing safety advocate) turn down the offer of a beer in re-imagined scenes from the past.

To build these moments, the team at MPC trawled through archive footage to pick out elements that could then be slotted into carefully choreographed new scenes. By playing with grain, colour and the analogue idiosyncrasies of old school telecine, the grade guides the viewer through the journey of Jackie Stewart’s career.

LBB> The look and feel of the film is inspired by Roman Polanski's 'Weekend of Champions'  - how did you use that as a guide?

JC> The look and feel of Polanski's film was used as a starting point. We matched the actual footage to it, then Gary (Director) and Publicis Italy (agency) decided on the overall grade, particularly what would work best as a narrative as it is supposed to happen over several years, for instance the beginning was originally in colour but was turned black and white in the grade.

BM> We embraced the look and feel of the camera work in Polanski’s film and that became the style guide for our shots. It was a wonderful piece to work with.

LBB> The new-old footage was created by matching up elements of stock footage as well as mapping it onto the stand-in's face and head. How did you go about researching and digging out the old stock footage? How long did it take you and by the end, what sort of archive had you built up?

BM> A lot of the footage was taken from Roman Polanski’s film ‘Weekend of a Champion’, a 1972 documentary film that captures the effort of British Formula One racing driver Jackie Stewart to compete in the 1971 Monaco Grand Prix. Director Gary Freedman had a clear vision of how he wanted to tell this story. An animatic was made well before the shoot so it became clear what original footage of Jackie from Polanski’s film we would use to make the composite shots.

LBB> What was the time scale on the project?

BM> Once we received the edit there was a team of 6 VFX artists that worked on the project for 6 weeks.

LBB>This is the sort of spot that proves VFX isn't about 'post' - I know you worked very closely with Gary Freedman the director and that the choreography had to be carefully planned to work seamlessly with the footage and VFX. At what point did you get involved in the project and before the shoot started, what sort of planning and preparation work did you do with Gary?

BM> We were involved in the project as soon as director Gary Freedman was awarded the project. We worked closely with Gary and editor Adam Spivey, using an animatic cut by Adam. The animatic contained the original footage of Jackie comped into the storyboards. This was a great tool that really helped plan the shoot and was a great guide for Jackie’s body double to use and to rehearse his action prior to the main shoot.

LBB> There were multiple plates and a lot of little fiddly details - how did you go about keeping track of all of this?

BM> Once the shoot was complete and the edit was finalised, we then prepped the archival footage of Jackie. MPC VFX Producer Phil Whalley made an extremely detailed schedule of the specific tasks asked and a schedule for all the comp work on each shot. Each shot was broken down to each task. This was very important to make sure nothing was missed and to keep the project running on time.

LBB> From a tech point of view, were there any unusual or new tools used to create the ad?

BM> The comp tools used were Flame and Nuke and camera and object tracking software. MPC tools were used to help manage the film grain. Baselight was used to grade the footage.

LBB> I guess with this spot you have an extra challenge in that the real Jackie Stewart shows up at the end, so viewers are able to make a direct comparison - did that create any sort of extra pressure?

BM> We were committed to making the shots as seamless as possible. We are always very hard on ourselves on a large VFX project like this; there is a great passion amongst the VFX artists to always make sure they deliver work to a great standard.

LBB> The spot covers several different eras – from a grading perspective, what sort of challenge did this pose? And how did you ensure that despite the distinct 'looks' the whole spot tied together?

JC> The eras had to be distinctive as the spot clearly takes place over a long period of time; this is why it starts black and white, and then the colour builds up in saturation throughout the spot. The grain is also a big part of it, some of it is noise from source material that we had to replicate or analog artefacts from telecine transfer (green afterglow from Rank Cintel machines!), all these had to be emulated or removed depending of how true we wanted to be and how the story would flow. Most of it had to have some sort of colour restoration.

There is not a typical ‘60s or ‘70s look as such but more like 16mm film either negative or reversal transferred on various telecines to tape. All colour sequences by the pit lane or racing track had their challenges and were interesting, particularly the footage that was recently shot. It had to be matched seamlessly to the old footage.

If the grade is well structured it will flow anyway, I mean each sequence has its own look and there is no question whether this happens before or after. I also avoided big jumps in contrast and saturation.

The filmic look is the backbone of the grade. For example, re-introducing grain in clipped highlights of a bad video transfer is one of a number of tricks I used.