How Mindshare Used 'Mogees' to Make a Mazda3 Musical 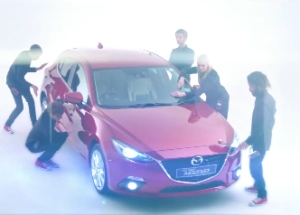 Mazda, the Japanese automotive maker has teamed up with media agency Mindshare UK to turn the all-new Mazda3 into a musical instrument with the help of Mogees.

The musical car has been created by covering an all-new Mazda3 in Mogees, an innovative technology that turns physical objects into unique music instruments by converting the vibrations made upon touch into sound. Mogees were founded by Bruno Zamborlin as a Kickstarter project and are not yet available on the market.

The musical car is being created as part of Mazda UK’s social strategy, driven by Mindshare UK to create a highly shareable video to engage the Mazda buyer with the brand. The video features percussionists ‘playing’ the car.

The video will be available on Mazda UK’s Facebook and Twitter pages as well as the Mazda UK YouTube channel from today. A behind the scenes video and teaser videos will be released alongside the main video.

Bruno Zamborlin, founder and creator of Mogees said, “This is the first time that we have worked with a brand and we wanted to create a truly creative project to showcase Mogees, which Mazda and Mindshare made possible.”

James Crouch, Senior Marketing Manager at Mazda UK said, “The target audience for the all-new Mazda3 has an interest in music and technology so our partnership with Mogees taps right into that zeitgeist.”

Rob Slade, Social Media Manager at Mindshare UK said, “The partnership with Mogees has given us the chance to create a video that highlights the car in such a different way. We’ve ditched the traditional track film and made something that reflects Mazda’s innovation.”