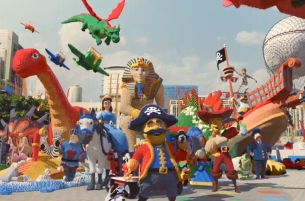 The global campaign, directed by Russell Tickner out of Mill+, aims to capture the magnetic and universal appeal of LEGOLAND. It sees a host of characters come to life in a young boy’s bedroom, before spilling onto the streets and triumphantly arriving at the gates of the theme park. The host of colourful characters, which includes dancing camels, pirates, pharaohs and parrots, are led by a LEGO dragon, which sweeps through the city, mimicking the iconic LEGOLAND rollercoaster ride.

Each character was carefully concepted, designed and crafted by the 3D team over several months before being animated and brought to life, utilizing millions of CG LEGO bricks. It was then the job of the 2D team to blend all of the CG LEGO renders and matte paintings into live action plates, captured during the shoot in Cape Town.

Director Russell comments, “This project really showcases the Mill+ team’s creative passion and ability to bring to life a fantastic brief from BMB.

Collaborating closely with the agency creative team, all of the various VFX specialists worked together from the outset, involved in every element from the pre-production, storyboarding and character design, to the ‘bricking’ animation tools developed specifically for this job.

"I am incredibly proud of the whole team and the final result we’ve created.” Joint head of 3D Dave Fleet adds, “This project gave us the opportunity to flex our creative muscles and create a really dynamic and fun piece that captures the magic of a LEGOLAND day out. The project utilised a range of disciplines, meaning we had to streamline the process in the most effective way possible, to deal with the many millions of CG LEGO bricks created.

Firstly, our characters were modeled as polygonal meshes. These were then rigged and animated, then passed from Maya to Houdini using Mill+’s custom caching format. At this point the animators would also export what we refer to as a 'callsheet'. This is basically a live list of ingredients that go into each scene."

Russell and the animators were regularly changing characters, so it was vital to make this as easy as possible so the FX and lighting teams were always up to date.

We then started the process of turning the animated characters into bricks, by creating our own plugin aptly named 'Bricker'. Bricker was seamlessly integrated into our existing pipeline and automatically picked up animation updates and knew when new characters got added or removed from a shot. As LEGO bricks come in all different shapes and sizes we built sliders within the tool so the artist could decide which bricks were used and ultimately how the character was built.

Some of the larger assets had a lot of bricks! The Pirate ship had the most, at around 3 million individual LEGO bricks, not including the huge wave it was riding. Bricker included many other optimisation features like camera culling and hollowing out the characters to save on bricks and to speed up the whole workflow.

The bricked characters were then passed onto our Lighting team as a huge point cloud, each point representing the location and colour of a brick. This allowed our lighting scenes to be very lightweight as the LEGO bricks themselves are only created at render time using Arnold's powerful instancing system.”

As well as CG bricks, The Mill+ VFX artists also worked to build real LEGO models, which were used on-set as props in the opening scene. These bricks were then donated to the Agape Educare Centre in South Africa. Russell continues, “Everyone has a soft spot for LEGO, and our studio became a magnet for LEGO builders from all over The Mill, keen to show off some real 3D modeling skills. That enthusiasm and creativity has been sustained throughout the entire process.

I'm really pleased that the building continues - with a lot of the LEGO used in the production finding its way to some very good causes supported by our colleagues in Cape Town. Watch out for my favourites; the pirate Jack Russell and the high-spirited Vikings, who are pitching for a commercial of their own.”