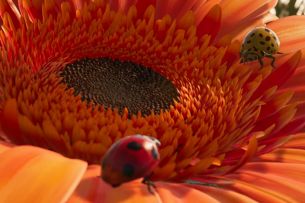 Mill+ has released a behind-the-scenes look at the making of ‘Insects’, their recent real-time project created in partnership with Microsoft. The interactive experience, directed by Robert Sethi, is designed to showcase the cutting-edge capabilities of the anticipated Xbox One X.

The 60-second piece depicts a vibrant journey through a ladybug’s CGI world. Users can toggle between feature configurations for 4K Ultra HD, wide colour gamut, high dynamic range rendering and spatial audio, offering a close-up look at the granular level of detail within the Xbox One X at 60 FPS. They can also alter the colour of flowers, the ladybugs themselves, and even the time of day.

“Our close collaboration with Microsoft was integral to the project’s success,” says Sethi. “As one of the first 4K real-time tech demos, ‘Insects’ perfectly allows the audience to interact with the Xbox One X – while at the same time being fun to watch. Seeing it all come together from a directorial standpoint was incredibly exciting, especially as Mill+ continues to bolster its presence in the real-time world.”

Music: The Sound Lab at Technicolor