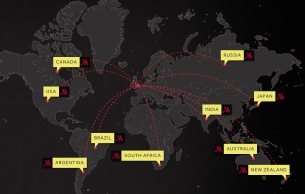 Microsoft Advertising and MEC Access are announcing the launch of a new cross-platform sponsorship activation campaign for Marriott Hotels. #ReuniteMeWith will lead on Skype in a first of its kind to run in 13 countries, giving English expats the chance to travel home to watch an England game at Twickenham with their family and friends. It will also run across other Microsoft platforms including MSN, Outlook.com and Windows 8 in the UK.

#ReuniteMeWith will encourage user generated content contributions from rugby-loving consumers with family or friends living abroad in the form of a video clip submission via the #ReuniteMeWith website.  These personal nominations will seek to show why their fellow rugby enthusiast from abroad should be chosen to attend one of four top matches at Twickenham. Four winners will be chosen by Marriott and flown home for an England game in 2015 – the first being the last game of the RBS 6 Nations, England v France on March 21. 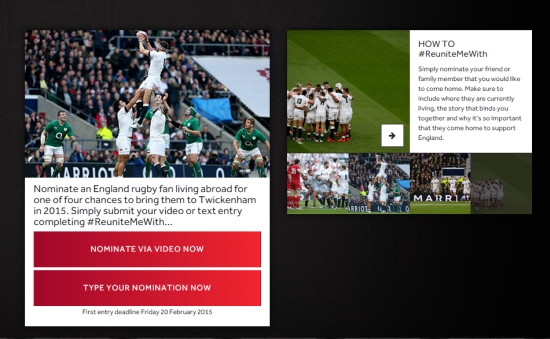 The first phase of the campaign, for the RBS 6 Nations, is running until 20 February.  Outside of Microsoft platforms #ReuniteMeWith will be also be promoted across a number of additional channels including content creation, digital engagement, social media, England Rugby channels, experiential and PR.

The strength of Microsoft’s audience insights data around Marriott Hotel’s defined audience of ‘Master Blenders’ led to Skype being chosen as the key partner for the multiplatform campaign.  Combining user demographics and behavioural insights led to an understanding of regular online communication patterns between the UK and nations around the world.  This allows Marriott Hotels to speak to relevant audiences that not only fit their target demographic, but also interact often with the 13 chosen countries selected, based on their strong expat communities and propensity for rugby.

Ben Bradley, Business Director, MEC Access, said: “We’re very excited to be launching #ReuniteMeWith with Skype for Marriott in such a big year for rugby and Marriott’s sponsorship of England Rugby. In what will be a cluttered marketplace for brands trying to leverage the rugby buzz, we have partnered with Microsoft Advertising to develop a creative campaign rooted in consumer insights, which looks at the million plus fans who live abroad and their connections to friends and family back in England, giving Marriott a clear space of ownership.”

Chi Nguyen, Director Field Marketing Europe, Marriott Hotels, said: ”This year will be a magical time for rugby fans and seeing England play at Twickenham is always a special occasion. We wanted to do something special for fans living abroad, who usually can only watch the game on TV at awkward times in the middle of the night. Microsoft and MEC Access have taken a creative, insights-led approach, enabling us to provide four lucky fans with the opportunity to experience England rugby live.”

Stuart Flint, Sales Director, Microsoft Advertising, said: “Skype is where today’s connected consumers go to have meaningful conversations with their closest friends and family.  There’s an average of 50 billion minutes of calls made on Skype every month, and we know Skype users have a high propensity to book holidays online. Using this insight, our technology and Skype’s ability to connect friends and family around the world, we worked with MEC Access to develop a bespoke campaign that drives engagement with rugby fans living overseas for Marriott.”