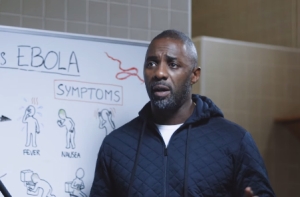 M&C Saatchi London and interactive video agency TouchCast, in partnership with Park Village, KYNE, freuds, Green Door Pictures and RadicalMedia, have unveiled an integrated campaign for the Centers for Disease Control and Prevention (CDC) Foundation to raise global support for health workers battling Ebola and encourage people to donate towards the fight against the disease.

Launching this week during the Official Draw for the Africa Cup of Nations football championship, the campaign will run on TV, radio and OOH in West Africa with the support of a wide range of media, sport and health organisations, while also being seeded online to reach a global audience.

The centrepiece of the campaign is a pair of short films – ‘We’ve Got Your Back’ and ‘West Africa vs. Ebola’ – created by Matt Roach and David Lawrie at M&C Saatchi, in partnership with Paul Field and Edo Segal at TouchCast. One stars the actor, Idris Elba (The Wire, Luther, Mandela: Long Walk to Freedom), while the other features a number of well-known footballers of African descent, including Yaya Touré (Manchester City and Ivory Coast), Patrick Vieira (Ex-Arsenal and World Cup winner) and Carlton Cole (West Ham United).

In ‘We’ve Got Your Back’, the footballers acknowledge that although fans regard them as heroes, they are not true heroes like those tackling Ebola. Each player wears the name of a health worker on their back as a symbol of support for ‘The world’s most important team’. The goal of the film and poster campaign is to end the stigma surrounding health workers in West African countries. The other PSA stars Elba as a football manager giving an educational team talk to West Africa in the face of its “life or death” game versus Ebola, outlining the symptoms and tactics for how to beat it.

Interactive ‘TouchCasts’ of both films will allow users to discover individual health workers’ stories, find out more about the disease and donate to the cause.

“The team from M&C Saatchi and TouchCast provided the creative spark that has really brought this campaign to life. It was great working with them on this critical project.” Idris Elba commented. “I am in awe of the bravery of these health workers who put their lives at risk day in day out to stop the spread of this terrible disease. My hope is that in some small way the creation of this campaign will ensure that these workers get the support they need and that the key messages are delivered to people on the ground to help them in their fight. #WeveGotYourBack. We will support you.”

The campaign will be hosted on www.WeAreAfricaUnited.org in a number of languages including English, French, Krio and other local languages. It will also feature on TouchCast.com and be available on YouTube.

The 2014 epidemic of Ebola is the largest in history, infecting 15,000 people and taking the lives of more than 5,000 people to date. While the spread of Ebola is a threat to people, health systems and economies around the globe, West African communities in particular are being crippled by the disease as a result of already strained healthcare systems, mistrust of health workers and fear and stigmatisation of those infected.