How Many Years Does It Take to Change a Light Bulb?

iris brings light bulbs into the 21st century for Philips 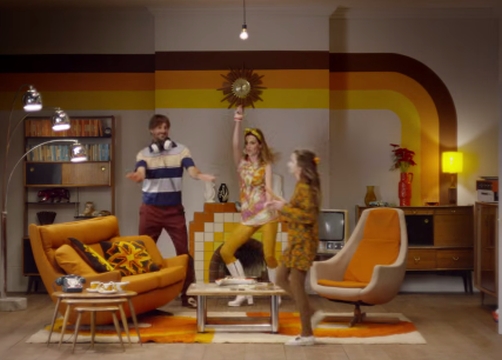 Royal Philips, the global leader in lighting, has created the first  digital advertising campaign for connected lighting as the birth of its range of Philips Hue products marks a turning point in the history of the light bulb.

For decades, light bulbs have required little advertising as the concept has remained relatively unchanged since the first incandescent versions hit shelves in the 19th century. However, Philips has now revolutionized the industry with its Hue connected lighting system and finally given advertisers something to shout about. The result is a new campaign for Philips Hue, which shows how connected lighting is transforming the way people experience and interact with light at home for the first time since the light bulb was invented.

The advert, created by creative network iris and Cannes Lions award-winning director Martin Stirling, charts the evolution of the light bulb from the perspective of a family sitting room and aims to showcase the possibilities of connected lighting to a mainstream audience interested in home décor, pop culture and design:

Beginning in 1879 – the year the first commercial incandescent light was unveiled – the film depicts a family excitedly fitting their first light bulb. However, as the furniture, fashions and household gadgets change drastically over the decades, the same crudely-controlled light switch and bulb remain the same. It is not until the room updates to the present day that the father replaces the bulb with a Hue lamp and the seismic shift in lighting becomes evident, showing the family enjoying a range of lighting experiences to suit the moment and their moods.

It will be aired online and outdoors and via smart TVs through September and October in the UK, US and Benelux countries in 30, 60 and 90-second formats.

“Light bulbs have largely been left to sell themselves for much of the last century as there was very little new to say about them until now,” said Filip Jan Depauw, Senior Global Director of Connected Lighting at Philips. “While every other aspect of our homes and lifestyles has undergone rapid change over the past 150 years, lighting has remained much the same. Philips Hue is changing the landscape of the industry irrevocably, empowering people to enrich and improve their lives through light, so showcasing this in a campaign is a natural step forward. Thanks to Hue, the market for light bulbs is getting exciting and changing from one driven by need to one fuelled by desire.”

Chris Baylis, Executive Creative Director at iris, said: “We’ve created a film that you want to watch over and over again, and then pass on. It’s an idea that starts conversations, gets people remembering what they grew up with, and gets them thinking about how quickly technology has changed and enhanced their lives. Now it is lighting’s turn to change and transform their lives and homes.”

The connected lighting market is predicted to grow at an annual rate of more than 15% from 2014 to 2020, presenting a huge opportunity for marketers to bring the concept to the mainstream. The lighting market is also becoming more competitive as many more companies have begun producing LED bulbs.

Philips Hue redefines the possibilities of LED light with intuitive smart home technology, empowering people to create, personalize and control the light in their homes to match their moods and needs. With an intuitive app on your smart device, you can tune the brightness, tone and color of light to enhance everyday life, your passions and special moments such as a romantic meal or a movie.

Through internet automating service, IFTTT.com, Philips Hue can also connect with the Web and other connected products such as fitness wrist bands. This means your lights can be programmed to illuminate intelligently as you wake up, indicate when it’s about to rain, or flash when your sports team has scored. Developers are also recognizing the potential of new applications for light with Hue. Almost 200 apps are already available on iOS and Android for ambient effects, music, entertainment, photography and much more.