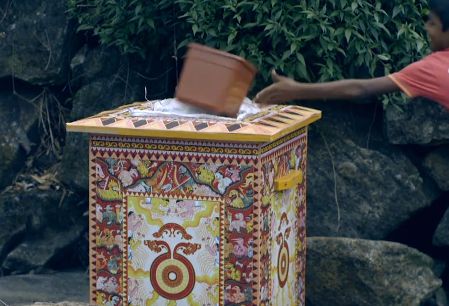 Sri Pada - or the mountain of Buddha - is uniquely sacred to a deeply spiritual Buddhist majority in Sri Lanka. However this stirring ceremony of nearly 500,000 pilgrims who visit the holy site everyday, during the season, brings with it the unholiest of sights - garbage. The Rathnapura Provincial Council, the body responsible for maintaining the sacred site, wanted to find a solution that is sustainable and effective.

The proposed idea had to respect the importance of the site, understand the deeper cultural nuances and take into account the psychological framework of the pilgrims. Since a cross segment of devotees visit the mountain, young and old, we needed a solution that could be easily adapted and accepted. An organic conversion, from shifting a daily practice into one of spiritual significance, was ideal and doable

Each stride of the demanding 25,000 steps is accompanied by religious chants, seeking ‘good karma’ or merits from the divine journey. We researched and re-wrote these traditional chants to champion the idea of waste disposal as a way of collecting merits. Temple Wardens and Pilgrims carried these chants and reminders to millions of journeymen.

Inspired by the Buddhist practice of collecting merits by making monetary offerings to temple tills, we also created special bins to complement the message. Instead of donating money however, pilgrims could now donate garbage. These Donation Bins were placed all along the pilgrims’ route.

Overall, three and a half times more waste was collected from all garbage bins, while on average each of our special bins collected twice as much. Garbage was no longer garbage; it was an opportunity to amass merits by doing good, under the light of Lord Buddha.