How Leo Burnett Bio-Cooled a Town for Coca-Cola

'Bio Cooler' relies on non-electricity to refrigerate in blazing weather 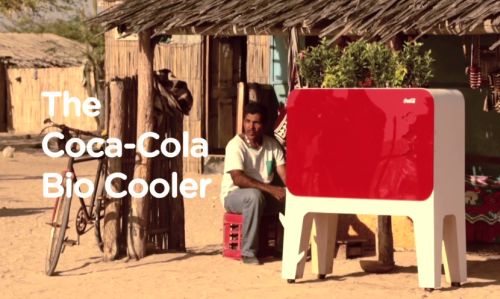 How do you cool down a town where the temperatures are extreme, and electricity is nowhere to be found?

That's what Coca-Cola, in partnership with Leo Burnett Colombia, set to find out. In a town like Aipir, where there's certainly no fridges (and a walk to get ice is an all-day commitment), the answer to the harsh conditions was not readily apparent. Enter the Bio Cooler, a refrigeration system that relies on non-electricity based methods to cool down whatever it contains.

The best part? The hotter it gets outside, the better the Bio Cooler works.

The Coca Cola Bio Cooler Project has been inspired in those towns around the world which live under extremely hot conditions. And which, very often, don’t have any power supply to keep drinks cool in a fridge. The idea´s development took around one year, from its early conceptualization to field tests. It was created by Leo Burnett Colombia and developed together with the International Physics Centre in Bogota.

The Coca-Cola Bio Cooler is a completely revolutionary fridge that doesn´t need electricity to operate. Its design is based on ancient cultures, who cooled the air through water evaporation. It taps onto sun heat in a very simple and innovative way. The warmer it gets, the better cooling effect it can achieve. The fridge, which has been thought to work as a vending machine, can store up to 3 different types of canned beverages. The project was successfully launched in Aipir, one of the hottest towns in Colombia, located in La Guajira, to the north of the country. Showing once again, the brand’s effort to bring happiness to as many places as possible around the world.