Trends and Insight 148 Add to collection

Jumbla and The Sanford Partnership collaborate on molten animation 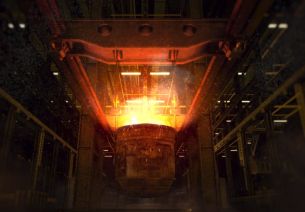 What do you get when you take a standard small car and give it more power, updated suspension, better brakes, and sportier styling? The answer is a hot-hatch…and they don’t get much hotter than the all-new Suzuki Swift Sport.

Having received an initial concept from creative advertising agency, The Sandford Partnership, the Jumbla team explored the idea of depicting a stylised steel works, where the Suzuki Swift Sport emerged from piping hot molten metal.

“We had to work out how to visualise a car being formed out of liquid and bring it to life,” Jumbla Creative Director Oz Smith said.

The backdrop of a steamy, spark-heavy industrial environment was created from scratch by Jumbla Motion Designer Jade Ngo. Central to this was a steel bucket, from which molten metal poured to form hallmark features of the Swift Sport such as 17-inch alloy wheels and the instantly-recognisable Suzuki logo.

“The client was very particular about the appearance of the Swift Sport, so each element was sculpted with exactly the right curves and highlights,” Oz said.

While the imagined industrial environment was an interesting concept for a ‘hot-hatch’, the actual car needed to take centre stage.

“Initially, everything was glowing red hot with lots of heat shimmers. But we toned this down because it detracted from the Swift Sport’s sleek, yet strong contours.

“In the end, we managed to create something brooding and powerful that culminates in a release when the Swift Sport is unleashed into the city.”

Putting problem-solving skills to the test

Creating the properties of molten metal was fun, but it presented a huge challenge.

“It needed to have a mind of its own, so being completely lifelike wasn’t applicable - it was always going to do something at odds with nature and gravity,” Oz said. “We tried to create something that not only looked interesting but also formed the car quickly in a lifelike, visually-satisfying way.”

Senior Motion Designer Cornel Swoboda utilised his extensive industry knowledge to identify the right tools and techniques for the job.

“Cornel used Real Flow to create the bulk of the molten metal shots, which involved a lot of experimentation with different viscosity of the liquid,” Oz said.

“Real molten metal is quite watery and runny, but we wanted something with sentience. We settled on a thicker, honey-like consistency, which is more believable and controlled.”

“It was a challenging project in some respects, as the client wanted an almost photo-real setting for a somewhat unreal subject,” Jumbla Executive Producer Charlotte Parsons said. “Credit for making this possible goes to Oz - he came up with a lot of ideas and nailed the execution.”

In addition to overseeing production, Charlotte maintained strong lines of communication between both the agency and client - neither of which had prior experience of motion graphics or CGI.

“On the production side of things, we had a lot of face-to-face workshops to make sure everyone was on the same page. We sent weekly animation WIPs to the agency (The Sandford Partnership) along with fortnightly WIPs to the client (Suzuki).

“Because the on-air date was already set, we only really had five weeks in which to finish it. We’ve never had to create 3D models of a product with only images as a reference, and this was for a highly detailed, stylish car.

“But because we were set and secure with our deliverables and deadline, the team pulled through with an awesome TVC.”

Matthew Burgess, Creative Director at The Sanford Partnership, commented: “The very first time I spoke with Jumbla I said, ‘I want to create this car and it's got to be 100% perfect, but I can't give you any CAD drawings’. That was a challenge in itself. But the guys put a lot of work in, got the car absolutely 100% correct and it looked fantastic. I gave Jumbla the concept and said, ‘Here's the idea. This is our first job working together. Show me what you can do’. I was very impressed with what they came back with. It was a very collaborative approach - we had a close relationship with Oz and Charlotte, fleshed out a lot of ideas, and it all came together really well.”

Michael Pachota, General Manager - Automobiles at Suzuki Australia, said: “The first reaction - everyone was blown away. We've never done something like this before. The feedback from our dealer network, and audiences alike has been that its probably the best television commercial that we've ever produced for Suzuki Australia. We were fortunate enough to have technology like this at our fingertips. Jumbla and the the Sanford Partnership helped us create exactly what we wanted to see. Working with the Sanford Partnership and Jumbla on this particular project was quite exciting. It was something that I'll always look back on and treasure because it was the first one I did as General Manager, but really executed in the best fashion possible. I think it was amazing.”