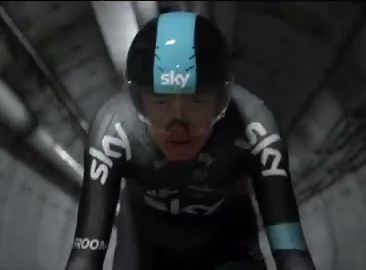 A unique project created and produced for Jaguar by content creation agency Inc has made Tour de France 2013 winner Chris Froome the first person to cycle under the sea from the United Kingdom to France.

As the world’s leading professional cyclists depart the UK for France after three days of enthralling action, Jaguar has released a short film on Monday 7 July conceived and filmed by Inc titled “Team Sky – Cycling Under The Sea.” The film documents the Team Sky leader riding from the Eurotunnel Terminal in Folkestone on England’s south-east coast, to Calais in France.

Froome rode through the tunnel at a training-pace, completing the ‘world first’ ride in a time of approximately 55 minutes and reached speeds of up to 65km per hour.

This groundbreaking marketing initiative follows the recent launch of the Pinarello Dogma F8 at Jaguar Land Rover’s base in Gaydon, and further demonstrates Jaguar and Team Sky’s partnership and brand campaign ‘#KeepPushing.

Inc conceived the idea of Chris Froome cycling through the Channel Tunnel and took the idea directly to long-term client Jaguar due to its ongoing relationship with Team Sky. Inc negotiated permission and support from Eurotunnel for what was only the third ever major film shoot in the tunnel.  Eurotunnel are celebrating its twentieth year in 2014.

Inc specialises in creating credible content for media and brands and the company’s logistical expertise was extensively utilised on a shoot requiring a crew of more than 60 people. Special electric camera rigs and an ‘eyeball’ cam were used to film Chris Froome during the shoot on Sunday June 1, 2014 on one of Eurotunnel’s busiest weekends of the year.

Reflecting on his ‘World First’ ride, Chris Froome said: “Cycling under the sea was an incredible experience. Opportunities to become the first person in the world to achieve these kind of feats are extremely rare nowadays, especially as a pro-cyclist. To become the first person ever to cycle through the Eurotunnel was right up there with some of the most iconic rides I’ve ever done - this must have been one of very few ‘world first’ rides left!”

Jeremy Hart, founder and MD of Inc said: "We presented Jaguar with the idea in the middle of last year and they loved it. It was necessary to have a great journalistic concept and then present the benefits to both Jaguar and Team Sky. We work by having an understanding of what the media is after and creating content with extremely high production values. It’s resulted in a film that naturally integrates Jaguar’s brand messaging and remains a genuine piece of entertainment."

John Keefe, Head of Public Affairs at Eurotunnel said: “The Eurotunnel is an incredible, unique piece of engineering on par with the Golden Gate Bridge or Sydney Opera House. The problem of course, is that no one gets to see it, so we were delighted when Jaguar Land Rover came to us with this ground-breaking request.

“This was an enormous challenge to film for Eurotunnel as it required the highest standards of safety and security to be maintained at all times. We also had to be able to do it without interrupting the traffic flows on our terminal or through the Tunnel. Inc was up to the job. The preparation was fastidious and the management of the shoot was perfect. The results speak for themselves."