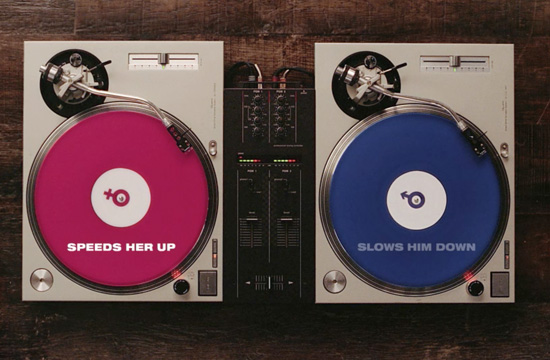 Agency launches “How in-sync are you?” online social game for Durex.

The iconic 50 second creative launched on YouTube on the 1st February showcasing the product’s “in-sync” properties by drawing on the insight at the heart of the campaign of “slowing him down and speeding her up”. This is masterfully executed by featuring a turntable with two records playing at different speeds being brought together in perfect sync to the soulful sound of legendary artist and master of cool, Marvin Gaye. For maximum authenticity a young cutting-edge DJ mixed the track for camera.
To watch the work, click on the link beneath:
http://www.youtube.com/watch?v=g02yZDYZXP0
An online social game will follow in the lead up to Valentine’s Day.  The ‘How in-sync are you?’ game will be available from Facebook to help people be in-sync with their virtual gaming partner.  A cross fader mechanism will determine which partners are in-sync in order to unlock onto the next level.  The game will feature well known tracks that need slowing down or speeding up to hear them correctly.  Couples will need to stay in-sync for 10 seconds to prove their virtual connection.
Russ Lidstone, CEO, Euro RSCG London said; "This campaign is further evidence of our social media capability working powerfully at the core of our uniquely integrated offer.  We have taken an intrinsically social idea and used an online platform, ahead of TV, as its launch pad”.
The global ad campaign will launch in the UK on TV with 40 and 30 second spots during prime time programming on ITV and CH4, towards the end of February.  The creative strategy behind the campaign aims to truly engage couples and those in a relationship looking to connect better during sex.
Stefan Gaa, Marketing Director RB UK said, “We’re very pleased with the “in-sync” campaign that combines a powerful and iconic creative with an interactive social media mechanic and an online launch platform.   We’re confident we’ve got the right balance of strong brand messaging with fun, engaging content.”
AGENCY Credits -
Creative Team: Fabio Abram and Braulio Kuwabara
Creative Directors: Mick Mahoney, Brendan Wilkins
Directors: Si and Ad for Academy Films
Producer: Katy Dell
Planning: Yelena Gaufman
view more - Creative