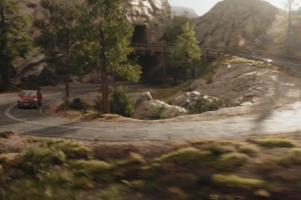 Innovative and unique, Honda has released 'The Endless Road', directed by Gorgeous’ Chris Palmer for mcgarrybowen.

Employing a hypnotic visual illusion to show Honda’s pursuit of perfection, a CR-V chases a never-ending spiral road – a world within a world, infinitely looped.

It looks simple, right? Like all good illusions, that’s where the magic lies. But, a look under the bonnet reveals some seriously technical production and post trickery at play. Chris and Glassworks' newly appointed CD Jordi Bares have been hard at work for the last few months with their team.

It is achieved using a three-dimensional Droste Effect (whereby a picture appears within itself, and so on). By creating it in a 3D space, the Endless Road can go on forever. The digital campaign is the world’s first endless online commercial (intelligently detecting your location’s weather and lighting and playing accordingly), so everything from lighting set ups to camera moves needed military planning and precision.

In the 4 months leading up to the shoot, Jordi and Chris created 126 different layouts. Nothing could be booked, green lit or filmed before this animatic was perfected. It became the entire production’s Bible, a computer-generated version of the shoot.

An illusion works until it is broken and the 180-degree camera track needed to end on an identical frame to the one it started on, forming the spiral loop. Jordi says this is by far the most technically challenging project he has worked on, and is immensely proud: “There are very few projects in which the creative demands such a technical effort as to challenge every single artist to their limit. This felt like a Russian Doll; one challenge’s solution would open up another. Chris assembled an exceptional team to create what seems like an effortless execution. He took us on a journey that I can only describe as incredible”.

Grand Central Recording Studios' Munzie Thind created the sound design for the spot: "The focus for this spot was expressing an idea of never giving up, being the best. The director Chris Palmer, at Gorgeous, came up with the concept of creating an endless loop of a car driving, alternating between day and night.

After the film was shot, my challenge was to build a soundscape that would fit perfectly with what you see on screen, and to create a continuous sound effect, that is always there, throughout the spot.

We tried out various music ideas, and eventually opted for the brilliant Kill Bill track Twisted Nerve, by motion picture composer Bernard Herrmann, as it felt just right, given the environment.  It’s jolly and quirky and it enhances the hypnotising feeling predominant in the spot."