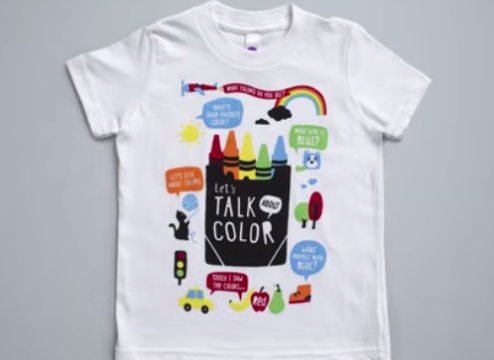 A new campaign from Goodby Silverstein & Partners called “Talking Is Teaching: Talk, Read, Sing” launched in Oakland this week. It features a clothing line, designed by GS&P, that will be given away free of charge to new parents.

The campaign, developed for the Bay Area Council, highlights how simple actions done every day from birth—such as describing objects seen during a bus ride, singing songs, reading aloud or telling stories—can significantly improve babies’ ability to build vocabulary and can boost their brain development.

“What makes this campaign different is that it’s not just another brochure,” said Jim Wunderman, CEO of the Bay Area Council. “We are bringing learning opportunities to Oakland by giving parents actual tools—a onesie for the baby, a blanket, a bath towel—that will spark conversation.”

The onesies, blankets and other materials will be distributed free of charge at more than 15 locations: Oakland hospitals, pediatric clinics, family playgroups, childcare programs and First 5 Alameda County. The clothing and blankets are all being produced by local clothing retailer Oaklandish.

“‘Free with every baby’ are the simple instructions,” said GS&P co-chairman Jeff Goodby. “And frankly, it’s just as much fun for parents as it is for the baby.”

The campaign also features billboards and bus-shelter ads with prompts like “Let’s talk about the bus” that will remind parents that everyday activities are an opportunity to help their child develop.

In addition to the billboards, there will be television and radio public service announcements running in the Bay Area and a website, talkreadsing.org, where parents can learn more.

According to recent field research, fewer than half of parents and caregivers in Oakland report reading to their children every day, and even fewer report talking about their day and singing to their children. These activities have been shown to have a profound impact on the early learning of very young children, whose brains develop approximately 80 percent of their capacity by age three. In fact, talking, reading and singing in daily routines builds children’s vocabularies—and a large vocabulary is a key predictor of later reading success.

“The facts about the word gap and the implications it has on the lives of children and their parents were eye-opening,” said GS&P creative director Nick Klinkert. “We were inspired to turn the world into a learning opportunity. We wanted the campaign to be colorful, positive and intuitive and we wanted every aspect to help start a conversation with your child, from the clothing line to the outdoor to the TV.”

“From our first meeting, GS&P blew us away with a new concept—not a PSA, not a pamphlet, but prompts to build new habits in everyday life,” said Susan True from the Bay Area Council. “We liked it from the very beginning because it was simple, positive and actionable at the right time: in the bath, at bedtime, during a diaper change, while getting dressed in the morning. We feel like this is an idea that can fuel the change our society needs, first in Oakland and then beyond.”

The idea caught the attention of Too Small to Fail, a joint initiative of Next Generation and the Bill, Hillary & Chelsea Clinton Foundation, and they are sponsoring the campaign as well, with plans to make it the model for a national initiative. Other partners include UCSF Benioff Children’s Hospital Oakland and Kaiser Permanente. Marc Benioff, founder and CEO of Salesforce.com, has donated $3.5 million to develop the campaign in the Oakland community.

Hillary Clinton spoke about her support for the program during a July 23 visit to Oakland hospitals.

There was also a citywide “baby shower” at Children’s Fairyland in Oakland on July 24. Hundreds of Oakland families received clothing, blankets and books and were joined by performer José-Luis Orozco, storytellers, storybook characters and community leaders.