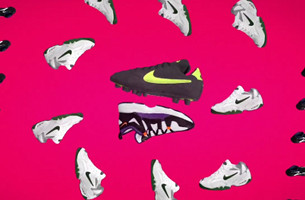 You’d be hard-pressed to find a brand that people have more of a relationship with than Nike. Moms, dads, kids, athletes, sport-lovers, sport-haters et al. will all probably at one point have had a connection with Nike. And more often than not that connection is through footwear. To celebrate 40 years of ever-evolving footwear, Nike recently gave directing collective Golden Wolf the enjoyable but daunting task of showcasing 200 of the brand’s most iconic shoes. The result is an evolving two-minute film that’s as much a showcase of shoes through the ages as it is filmmaking. LBB’s Addison Capper spoke with Golden Wolf to find out more.

LBB> What was the original brief like from Nike and what was it that appealed to you?

GW> The original brief was to figure out a way to showcase 200 of their most iconic shoes in a way that helped tell the story of their evolution as well as highlighting the seven eras of their development. I guess the thing that appealed to us most was the opportunity to not only work with one of the most iconic and forward thinking brands on the planet, but also being able to work with 200 of their shoes. That was mind blowing.

LBB> You’ve managed to squash 200 pairs the world’s most iconic shoes into a two minute film. How tough was it giving each pair a fitting tribute?

GW> The project came out in the run up to the World Cup, so the focus was very much football. With that in mind the guys at Nike gave us a list of shoes they wanted us to give the most air time, making it a little easier to pick and choose what would get the most attention.

LBB> How much input did Nike have into which trainers were featured and how?

GW> We worked really closely with the guys at Nike EHQ, and started things off by flying over to their office for face-to-face meetings to iron out all the details. They also had all of the shoes 3D-scanned, which gave them a degree of control over what the shoes would look like. Overall, though, they were really supportive of our ideas and vision for the film.

LBB> Each ‘era’ of footwear involves different animation and filmmaking techniques. Talk us through the styles you used and how they represent the respective time periods?

GW> There were two aspects to each approach. Firstly we wanted to convey something related to the moment in time they represented. So the first film, Genesis, which spanned from the 70s right up to the 90s, started off with a super-8 frame that then evolved into a 4:3 frame. And secondly we wanted to reflect the name and theme of the era. So the Golden Era was predictably very gold-based and Renaissance was based on fine art and sculpture.

LBB> What kind of research and pre-production did you have to do?

GW> It was a pretty fast and furious project. We just four weeks to create, so all research and pre-production had to happen in the first four to five days. During this period the team threw around a bunch of ideas and bounced them off the guys at Nike as quickly as we could think of them. Once we started to cement the ideas we jumped into animatics and initial style frames. From there on we went straight into production.

LBB> Is Nike footwear a brand you feel close to personally? If so, how was it working on something as iconic as this?

GW> We’re huge fans of Nike. They’re one of those companies that we always aspired to work for and, although we’d done a few projects with them in the past, this was by far the biggest and most ambitious. As soon as we got the brief we knew it had the potential to be a really special project - something that would push us further creatively and technically than we’d ever been before.

LBB> What were the trickiest parts of the production? How did you tackle them?

GW> Aside from the various technical challenges that present themselves on most projects, the hardest aspect was probably managing something with seven parts that were as different as they ended up being.

LBB> Big question: You can own one pair of Nikes for the rest of your life - what are they?

GW> One pair? That’s verging on impossible! Although we love love love the Air Max, based on extreme comfort it would probably have to be the Flyknits - either the Frees or the Racers. But please don’t make us choose between them!