A behind the scenes of AMV BBDO's & Rattling stick's Snickers campaign 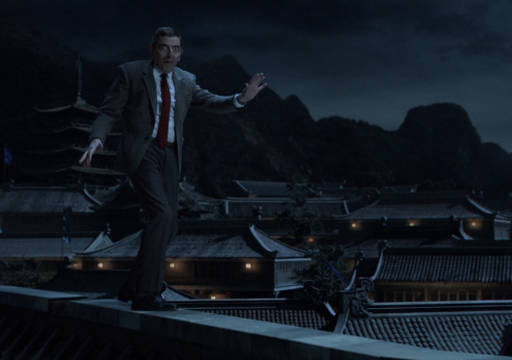 Welcome to ancient China for the latest advert in Snickers' 'You're not you when you're hungry' campaign, created by AMV BBDO, directed by Rattling Stick's Danny Kleinman and starring Rowan Atkinson as Mr Bean, in his first advert since the 1990s.

Framestore was responsible for the setting, invisibly fusing live-action elements shot at Shepperton Studios with a beautiful moonlit city crafted in post. "We needed to build an environment that didn't just provide a backdrop, but somewhere with the right atmosphere in which to set the action and tell the story," explains VFX Supervisor William Bartlett.

The initial previs and planning stages saw Framestore work closely with production designer John Ebden to see how they could recreate his set drawings for the spot's often fully CG shots, such as the opening wides where everything was created by Framestore - from the digital matte paintings for the sky and the distant mountains, to detailed foreground populated with houses, streets and soldiers created by the 3D team.

From there, Framestore cut to street level, where it had to integrate another detailed all-CG environment (dressed with lights, lanterns, flags, trees, doors, even a fish pond in the courtyard) with a few live-action elements - the foreground soldier and the men scaling the wall behind him, which were shot on green screen and then composited into the otherwise CG scene.

The acrobatics were shot on partial rooftops, which were then extended in every direction and sometimes replaced fully to create a stage for the action to play out on. The stunts were done on wires, meaning there was a considerable volume of removal to be done before the plate elements could be composited in, followed by a lot of hair-work to replace the detail that was lost during the process.

Atkinson plays Cheung, a hungry Kung Fu master transformed into calamitous Mr Bean by his hunger. Framestore created his trail of mishaps as he wobbles over the rooftops - adding in toppling tiles, startled birds and clouds of debris as he crashes through the roof - and face replacements for his stunt double when necessary.

The spot, which was colour graded at Framestore by Stef Perry, made its TV debut during The X Factor and will be gracing the big screen across the UK cinemas in the run up to Christmas. There are also four Mr Bean Kung Fu training sketches available through social channels and a takeover of 'The X Factor' app.