How Framestore Brought the Lovable Paddington Bear to Life 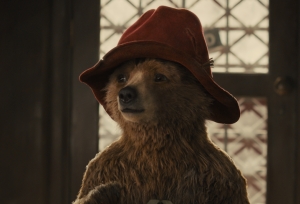 “Please look after this bear. Thank you.” Those are the words written on the note attached to Paddington’s coat as he sits forlornly in the station. They are also the words Framestore bore in mind when Studio Canal and director Paul King gave them the opportunity to recreate the famous bear for his big screen debut. Beginning in 2012, a 350-strong team spread across Framestore’s London and Montreal studios delivered 760 final shots for Paddington, 570 of which feature the marmalade-obsessed bear.

And it’s not just Paddington, there’s also a CG supporting cast including his Aunt Lucy and Uncle Patuzo, a dog and a flock of bothersome pigeons.

“You don’t really think about the fact that you’re creating a lead character at the time,” says Animation Supervisor Pablo Grillo. “You think wow, what a great potential to do some really lovely work and work with some wonderful filmmakers. That’s the hook. It’s only when you reach the end and it takes shape that you realise quite what a big thing it is.”

“It was challenging taking on such an iconic character,” adds Andy Kind, Framestore’s VFX Supervisor on the film. “From the Peggy Fortnum illustrations to the 1970s BBC series, there are a lot of looks for Paddington, and everyone has their favourite, so we spent a lot of time on the design before we found something that hit the mark.”

The film was shot at Elstree Studios and on location in London and Costa Rica, which doubles for Peru, with Framestore’s Tim Webber working as second unit director. “We shot at a very high altitude in the Costa Rican jungle,” says Pablo, who made the trip out to Costa Rica with Tim. “To travel from one site to another we were sending the crew and camera gear on zip wires over the canopy in order to reach the next set before the sun went down. It was quite an adventure.”

The beautiful jungle footage gives way to London, “It’s kind of a love letter to the city,” says Andy. “It’s London in all its beauty and grittiness. It’s always raining, in contrast to sunny Peru, which lends a huge amount to the mood and the visuals.”

While filming was taking place, the VFX team back at Framestore were hard at work perfecting the look of Paddington. “There was a lot of responsibility finding a photo-realistic design for a bear that people have so clear in their minds,” says Pablo. “We were keen to bring him into the real world so he would sit into the live action and, we hope, people will connect with him. Being anatomically correct meant we needed more detail compared with the simplicity of the original designs, which often had just two dots for eyes. We had to think about things like his wet nose, teeth and muzzle but still make sure that what we created carried that simple essence of the original Paddington.”

King briefed the animation team on who Paddington was before they started work, focussing on every nuance of his personality. The stop-motion TV series, where Paddington would often remain quite still, before doing something that took you by surprise, and there’s still a little bit of the old style in this new bear. “We tried to maintain that spirit in the way we crafted the performance. We didn’t put in too much and instead let things sit and rest. It’s very much in the style of the filmmaking – there’s no excess, it’s all very classic storytelling,” says Pablo.

“The hope was that rather than filling every moment with movement and unnecessary detail, you could just run a little wind through the fur to keep him alive and really hold some quiet moments,” Pablo continues. “In contrast we have his reactions to some of the more silly situations – to water, to marmalade, and the various conditions he’s put in. A lot of the humour of Paddington is watching him being put through the ringer.”

Water plays a big part in Paddington’s many disastrous moments. He is doused, sprayed and drenched in every imaginable way in set of unique sequences that posed some of the film’s most complex challenges in terms of visual effects. 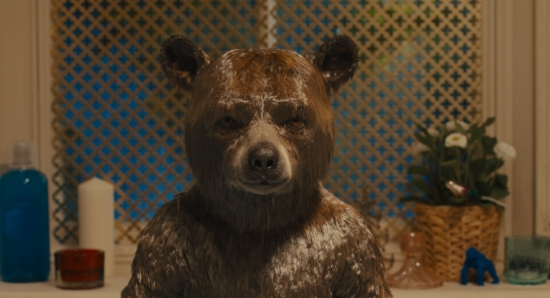 “The first issue was what does Paddington look like wet?” explains Creature Effects Supervisor Juan-Luis Sanchez. "We did it as it would technically happen at first, but then you lost some of what was Paddington, especially around his eyes, so we had to go back and recover his character. We blended between two or three different versions of his fur, which ranged from dry to soaked, depending on where he was getting wet. The important thing was to hit that balance between realism, the character and the comedy.”

Paddington also gets on the wrong side of a reel of Sellotape, which provided another stern VFX test. “The tape was probably the most complex mishap, because it’s not a manoeuvre you could easily map out, it had to be constructed carefully through a process of animation. On top of that we were dealing with a very complex effects scenario in having to simulate the Sellotape reeling out and wrapping around him. It was certainly a very difficult sequence to accomplish,” explains Pablo. 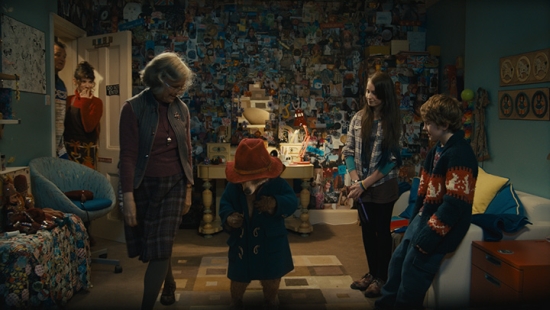 The introduction of Paddington’s famous blue duffle coat was another big VFX challenge, requiring an invisible transition from live action to CG coat as it is swept around Paddington’s shoulders by Mrs Bird. “It’s moments like that that I’m most proud of,” says Andy, “where hopefully no one will really notice what we did but maybe wonder afterwards how it was done.”