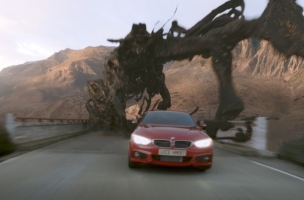 Framestore worked with J. Walter Thompson to deliver a shape-shifting, oil and metal based creature for Shell’s latest spot. Collaborating with director Carl Rinsch, the ad is predictably high-octane, with the stunning Chilean Andes serving as the theatre in which the action plays out.

Early character designs were done way back in late November 2014, with CG Art Director Grant Walker creating distinct characters for the different stages of the ad. "Carl the director had a strong opinion on what he wanted, but gave us a lot of scope to create original designs. The monster had to evolve throughout the ad and demonstrate the various threats to the performance of the engine" explained Grant. The monster at the start of the ad was based on a shrimp-like primitive creature, before morphing to resemble a spider and finally a land based mammal like a gorilla. “The concept character originally had more ambiguity to its form, but we made the conscious decision that it should take on more obvious forms. This gave the commercial more interest and the monster more identity."

The shoot took place over a four day period in December with VFX Supervisor Russell Dodgson and CG Supervisor Robert Harrington both in attendance. “It wasn’t like your normal supervising shoot. Carl was constantly whizzing off to get the amount of shooting done in the time we had available, and having the car and helicopter running a the same time, coupled with shooting on a Russian arm, it was pretty hectic” said Russell. “We had to capture everything about the scene throughout the day – sizes, colours, distances, shapes. It was a challenge to get everything done in the time we had, but a great experience overall” Robert said.

Shoot completed, post production kicked into gear in January. "The chaotic, transformational nature of the character called for some fresh thinking when it came to rigging," explains Lead Rigger Kimon Matara. "To manage permutations, a new codebase was established early on, built around Python inheritance patterns. The keyframed performance was layered with algorithmic effects, and a range of limb types were developed that could be animated at any orientation, roaming freely across the body. Deformer technology used to create the Mimics in Edge of Tomorrow helped refine the creature’s flow between states."

A library of various mechanical parts was created by the modelling team. This asset library was then used to populate the animated geometry with all the various mechanical parts. It was important to be able to art direct the shape, size and placement of these mechanical parts, as well as how they move independently from each other. Using Houdini's Bullet Solver we were able to manipulate the behaviour of the mechanical parts as though they were a particle system, using some custom forces to determine how 'magnetised' the pieces are to each other as well as setting thresholds for how far a piece can deviate from the rest of the group, until it falls off and becomes independent from the rest of the creature. Using this set-up we were able to manipulate a complex and as well as flexible behavioural system within Houdini, which still adhered to real world conditions such as self collisions and gravity. It was then a matter of building more layers of complexity on top of what we now had; such as making the pieces emit dust and small debris whenever they collide with each other or with the environment.

There was plenty of work to be done elsewhere, most notably in CG. Not only was the entire car created in CG and used in several of the shots, but the bridge was rebuilt in post, as was the petrol station seen at the end of the ad. “The tunnel sequence was by far the most challenging part of the ad from a classically CG perspective” said Rob Harrington. “On set it became increasingly apparent that filming the intended tunnel would be a problem, so we suggested creating one in 3D instead. The components were pretty straight forward, but deciding on camera moves and colours is an iterative process which doesn’t sit well with long render times. We decided to render the tunnel very neutrally in separate components, letting us re-design it in 2D instead. "

Shading, lighting and rendering were also big challenges for the team, with road replacements and environment clean-up adding to the workload. “The sheer volume of work the Nuke team got through was outstanding. A massive number of shots were entirely recreated, with a full environment made for the petrol station to sit in, as well as a large amount of recreation for the bridge environment" Russell added. Matte paintings were also composited into the bridge and petrol station sequences to maintain the spectacular surroundings, whilst a grade by Simon Bourne put the finishing touches on the action-packed ad.

“The premise of the grade was to keep a consistent late afternoon light throughout. This meant maintaining both warmish light tones and bluish, darker colours, whilst being careful to not overpower the characters. The shape-shifting monster is the main focus of attention, so I tried to keep all of the detail visible through all the particles and dust flying around, bedding the car and the monster into a natural environment.”

“From initial concept design, through the stages of animation and rendering, the entire team proved that nothing was impossible” said Director Carl Erik Rinsch. “As they have shown in their feature work, they also created photo-realistic CGI environments that even the camera operator could not discern from the material we shot. I cannot thank them enough for the sleepless nights and the passion they put into the project.”

“Every so often a commercial comes along that triggers everyone’s passions at the same time. That’s pretty rare” explained Russell. “Overall it was a massive job that exercised every muscle in the VFX body. I couldn’t speak highly enough of the team; they bonded over the course of the job and put in a lot of love and a lot of hours into a spot we’re all incredibly proud of.”