How Four Students Planned to Rebrand the City of Los Angeles

Students challenged to prove LA is a city of creativity & innovation 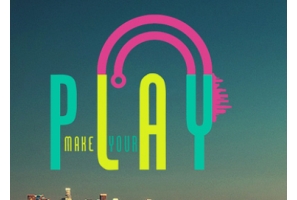 LA has many stereotypes but it’s not just for beach goers, blondes and Brad Pritt anymore – it’s now one of the biggest hubs for tech, advertising and media. This semester at Loyola Marymount University’s M-School, students were tasked with changing LA’s image to reflect the city’s latest evolution, and the results are in. And a winner has been named.

As ruled by the judges, the winners were Team Santa Monica a team of students made up of Natalie Alaverdian, Sabrin Budhrani, Nathan Poore and Nenah Bond.

The students had 15 minutes to present their idea for re-branding of the city of Los Angeles with the goal of persuading the jury (and ultimately business leaders from around the world) that the city offers a unique place where businesses prosper due to a climate of creativity and innovation.

The winning team churned out the 'Make Your Play' site. The site includes full video with all brand communication assets --- out of home, digital, experiential, media and more.

Krizstina Holly, Entrepreneur-In-Residence, Mayor Garcetti's office, said: “It was very enjoyable seeing the vast variety of angles the students took. The best presentations started with the strengths of LA that we can own as a brand -- our playfulness, diversity, inventiveness, and creativity -- and built on those. I was impressed by the approaches that engaged the community. Today, simply creating media and telling a story gets lost in the clutter; creating experiences, on the other hand, and inviting people to co-create that new narrative makes a story worth sharing! Mobile trucks, blank billboards, mystery tents, and personality tests were all some of the creative ideas that I can already see sparking new ideas in the mayor's office.”

Eric Johnson, President and Founder, Ignited, said: "I was blown away by the quality of the thinking and execution. Many of the ideas could be commercially executed for the city--and should be.”