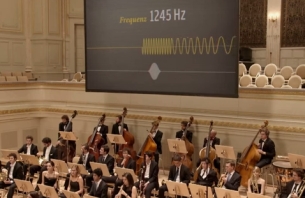 According to the World Health Organization, hearing loss affects nearly 360 million people globally. Unfortunately, the testing and diagnosis of hearing loss isn’t very high on the list of priorities when it comes to people’s health. In fact, most people often don’t even know they’re struggling to hear.

To help people hear more clearly, advertising agency FCB Zurich and Neuroth, an Austrian hearing-aid company, created the “Hearing Test Concert,” a live, classical music event featured Beethoven’s 5th symphony played by a renowned orchestra. The difference between this event and a normal night at the local philharmonic was that the music itself was specifically arranged to simulate the high-and-low frequencies and loud-and-silent parts of a traditional hearing test.

During the concert, some attendees discovered there were certain parts of the symphony they couldn’t properly hear so at intermission, participants were given the opportunity to have a personal consultation with on-site Neuroth audiologists.