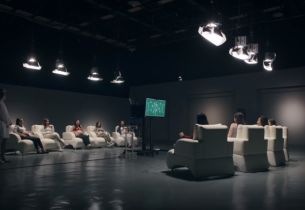 Feeling your unborn child kick and move inside the womb can be one of the most exciting times for soon-to-be parents. And as many pregnant women can attest to, some babies have quite the powerful kick. To the mother, it’s a sign of a life, a sign that the baby is growing, developing and getting closer to coming out… to a father, at least in most of South America, it’s a sign from the soccer gods – this child is meant to be a football player.

Estudiantes De Caracas, a professional soccer team and academy that raises the new generation of top players in Caracas, Venezuela, teamed up with FCB RG2 to create the “Little Kicks” campaign to motivate the mums to dream of soccer stardom as much as the dads. The campaign brought in 10 soon-to-be mums (and dads) in their 28th week of pregnancy, the week when babies really begin to move inside the womb, to play the first soccer match between unborn kids. Using motion sensor technology, the babies little kicks were converted into electric impulses readable by a computer. Every time a baby moved, it corresponded with a movement, pass or shot on the virtual pitch.

The campaign was a big success, in the first 10 days it had more than 750,000 organic impressions on social media, 64% of them came from women and in just one month Estudiantes De Caracas had exceeded applications for the year.