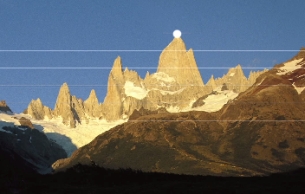 The majestic Andes Mountains are an awesome sight to see. They’ve been the muse behind many works of art, literature and music, but never like this.

By tracing a music staff along the mountain range, the peaks and ridges of the Andes each became a notes of a song. And by stringing these notes together, FCB Buenos Aires was able to discover the melody of the mountain. While a Jeep will help you get closer to the mountains, the “Landscape Song” will bring the beauty and awe of the Andes to life.