How Fake Love Brought "Social Prisms" to the Sundance Festival 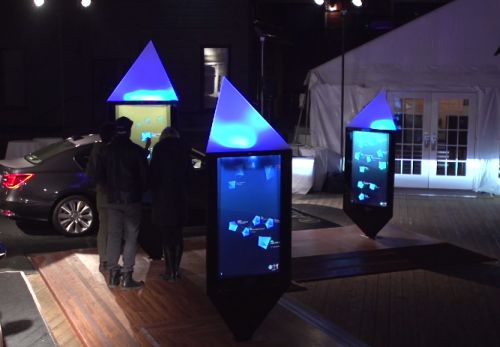 Award-winning experiential agency Fake Love has unveiled a case study for their work with Acura’s first ever interactive experience, the Acura Prism. Working closely with ad agency Mullen to produce the concept, the Acura Prism portrayed a network of socially connected geometric structures combined with modern sculpture and cutting edge technology – all centralized at the Sky Lodge during the prestigious Sundance Film Festival in Park City, Utah.

The gravity defying sculptures captured the attention of on-lookers by echoing the clean lines of the Acura automobile styling in geometric structures in multiple sizes. But these sculptures were for much more than viewing. Each sculpture contained a 360º prism shaped screen that aggregated and beautifully visualized all the social chatter related to the Sundance Festival by the most popular trends in film, personalities, and local events. The three large prism-shaped sculptures at the Sky Lodge even changed color according to the weather in Park City.

Upon arrival, a small satellite sculpture welcomed people with warm pulses of color as they approached the entrance, thus encouraging them to choose their favorite films of the festival. By utilizing more than six social databases, the sculptures acted as collection points for social content generated at the festival, thus contributing to the trending visualizations at the Sky Lodge plaza.

The ingenious installation also included a mobile web app that allowed users to view a pocket version of the Acura Prism visualization, as well as bookmark trending items from the physical installation to view for later.