Behind the Work 639 1 Add to collection 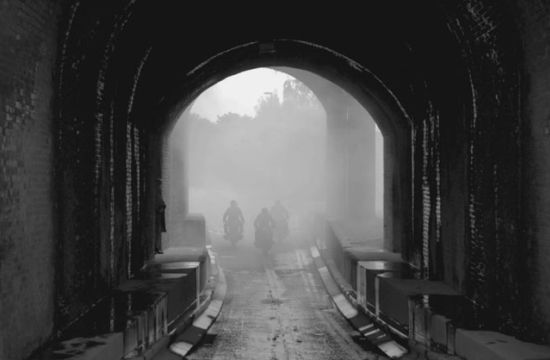 Forget polished chrome and Sunday driving, two years ago director Darren Statman re-invented the motorcycle commercial with his short film for bespoke biker builders Untitled. Noirish, photographic and hauntingly hellish, the film resonated with petrolheads the world over – and to prove a point, it recently picked up an award at the 2014 Portland Motorcycle Film Festival. LBB’s Laura Swinton looks back on a film that turned out to be a lesson in bravely turfing out the clichés of the big bike brands with Darren and find out how he, together with producers Mark Lonsdale and Lucien Evans of Leap Films, conjured up a cinematic short on a tiny budget.

LBB> When Untitled Motorcycles first approached you, what was it they were looking for?

DS> When I was approached by Mark Lonsdale and Lucien Evans of Leap Films to develop a project, it was at a time when I was trying to spend as much time with my dad who was gravely ill with cancer as possible. I'd just closed my small production company's doors. It was a tough time, and I was not really sure if I actually wanted to carry on directing at that point,  I felt there was more important factors in my life.

I met with Mark Lonsdale, who is a very old friend, and he pitched me the idea of us doing the project together. Mark knew that the challenge, open brief and chance to write and direct something would do me the world of good - he was right!

For years we'd tried to find a project to work on together, and on a rainy March day in Valerie Patisserie, Soho we sat and talked and talked, I felt that spark I wasn't sure I had anymore coming back.

LBB> The film looks and feels very different from most standard motorcycle ads and films - what sort of message and feel were you trying to capture for the brand?

DS> Myself and Mark looked at the motorbike ads that were all out there and they all seemed to follow the idea of guys on a Sunday riding in the country. Don't get me wrong, some were shot beautifully but they lacked resonance and after 10 seconds your brain dis-engages.

LBB> I love the juxtaposition of the grimy English back ground complete with greasy spoon caf with the surreal almost mystic goings on - how did you come up with and develop that idea? And were there any particular influences or references you had in your head when you created it?

DS> We talked about our love for 60's New York photography such as William Klein,  Eugene Meatyard and Bert Hardy and cinema of that period such as the work John Cassavetes and his approach to getting a group of people together and going for it.

We knew we had next to no money and we really were going to have to approach this guerilla style. The idea of writing and being ambitious was exciting, the ideas and the coffee flowed that day which was invigorating and scary.

I knew I was going to be limited and not have the tools to shoot bike porn. But I didn't want to do that. I felt the brand was bespoke rather than a specific bike brand, but the guys at Untitled were incredible engine Builders so the bikes’ sound was the one uniform connecting element that featured in all of their builds. So that was my way in to shoot the bike as a presence rather than a specific. I didn't want to go with the classic approach of ‘here’s the close up shots of a brake, throttle’  that you associate with bike films and I wanted to avoid the clichés as much as possible.

Working on the script took about four weeks for me to write. Myself and Mark were knocking ideas back and forth, taking into consideration the limitations of budget, and we started to come up with strands of narrative influenced those things that we loved from film and photography. We simply knocked the idea until we felt it was interesting and valid and it became this story about taking a short cut through a bleak, empty,  Bert Hardy-esque London that maybe could be maybe Hades. That would enable us to populate it with weird moments that could occur.

I wanted the film to visually look like someone had thrown a Can of Oil over the images; this was not going to be a film that was slick and full of shining chrome.

LBB> Where did you shoot it and what was the shoot like? How long did you have? And what were you looking for when you cast the actors?

DS> One of my passions as a director is casting and I had visuals floating around my head for a while of where I wanted to develop and build into the narrative. Again, working on the fact we had next to zero budget, it was time to hustle and try and get as many favours as I could.

I went to work drawing very detailed storyboards and a visual treatment which brought in some amazing talent such as the incredible DP Sam Care and editor par excellence Stephen Dunne at the Whitehouse along with the amazing help of the casting director Emily Tilelli at ET Casting everything slowly started to take shape.

As for the location scouting, it seemed like it took forever to find that Old London that is slowly disappearing, as I wanted the film to have a timeless vintage look.

Mark knew the streets around Millwall (he's a big supporter of the local football club) and they proved perfect. We decided that  if we were to shoot guerrilla style, it better be on a Sunday which would give us half a chance at not being arrested and also meant that we wouldn’t have to deal with too much traffic as we weren’t able to lock down roads.

With locations locked and Untitled to their credit maybe not understanding the script but trusting us enough, we focused on casting, which I know gave Mark, Lucien and Emily a few grey hairs. This was where the tiny budget was going to be spent and I wasn't going to compromise in this area.  Just because someone could ride a bike didn't mean they were right for the world I wanted to construct, so it took time actually up to the day before the shoot… but I'm getting ahead of myself.

A month before shooting , we were having problems securing the motorcycles being loaned to us by actual Untitled customers. It led to a very exhausted Mark phoning me to say that we had hit a brick wall and the shoot was being closed down or postponed.... I remember it clearly, I was walking through Soho after a tough weekend at home with Dad seeing how sick he was. I thought maybe it was for the best, the stress of having no budget and worrying about Dad was pretty overwhelming. I felt guilty for poor Mark and Lucien who, to their credit, were trying so hard and doing an incredible job to make this project a reality.

I remember writing the most passionate, determined  email of my life  on the corner of Berwick Street telling the guys at Untitled Motorcycles, that we are so close to being able to give them a film that I think could be really special. I said that I knew it was a wild concept for a tiny company who didn't even have a website up to a few month prior to trust me, Lucien and Mark. I told them that we'd managed to get some incredible talent on board to work with us on the project and that all they had to was just deliver the three bikes to the shoot and we'd do the rest!

Untitled came through, we got the cast right and we were set.

We shot fast and furious over two consecutive Sundays, each shoot day being about five hours long taking in two locations the first Sunday and three locations the second Sunday. It included about an hour in the fantastic Cafe 'The Den of Dreams' in Millwall that looked like it hadn't been touched since 1972.

Even though we were shooting quickly and there were some shooting compromises happening along the way, the production was great. Mark and Lucien were fantastic. Sam Care and myself working for the first time together really clicked. I felt the excitement of directing and seeing images  and quirky ideas that I'd talked with Mark about  in Valerie Patisserie five months priors actually coming from page to screen.

Exhausted after a hard, ambitious shoot, I started to cut with Stephen Dunne at the Whitehouse on weekends and evenings which was amazing. Stephen and I clicked and everything came together so quickly. Stephen has a great ear for sound design as we had no money for scoring the film we developed a growling bed of atmospheric sounds from a basic sound package that really caught the mood of the film I wanted.

We had a launch party for the film in the Untitled garages and then rolled it out online. The response was incredible. We got to see people respond to the film as it was projected on a grease stained sheet hung up in the workshops. There was cold beer flowing and jumbo hot-dogs sizzling on an old-school grill and the place was packed with friends and bikers who Untitled had built bikes for who all turned up on their incredible machines to see the film. There was also an exhausted Mark and Lucien who did an incredible job producing and for them to see their hard work up on the makeshift screen made for an incredible night.

LBB> The film has just been awarded at the Portland Motor Cycle Film Festival - why do you think it has resonated so deeply with bikers and enthusiasts?

The Film was picked up by so many bike-lovers and petrolhead sites and that was satisfying. The Grass Roots Cafe Racer enthusiasts really loved it along with the trendy, style/fashion blogs, such as Yatzer and Hypebeast and for it to now win the Portland Motor Cycle Film Festival Best Art Haus Film is incredible.

I was worried to be honest it would be dismissed by Bikers, as all style no content ... but you ask me why it has resonated so deeply with them? My take is that the film was made with the same passion that goes that goes into the rebuilds of  old bikes into something new by a small company that loves what they do.

The irony was never lost on me that rebuilding and making something out of pure love, doing what you enjoy most was a theme I shared with Untitled and was what I got from making this film with Mark and Lucien.