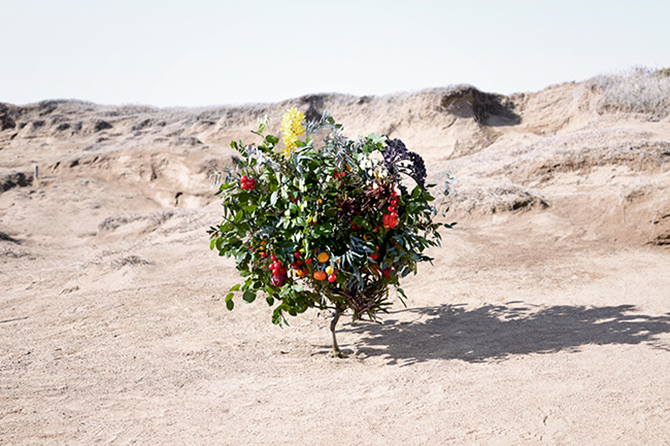 Dentsu exhibited four different projects in SXSW’s trade show this year under the development concept Pointless Brings Progress, which they featured in the first instalment of this series. In the four subsequent articles of the series, we are giving the spotlight to the creatives who oversaw the development and production of each exhibited project.

For this instalment, they spoke with Koji Hirohata, a technology planner at Dentsu CDC and Dentsu Lab Tokyo. He was involved in the SXSW exhibition of RETHINKING TOBACCO, a project utilising biotechnology, which is very rare at SXSW. Here, he explains how the exhibition was created. 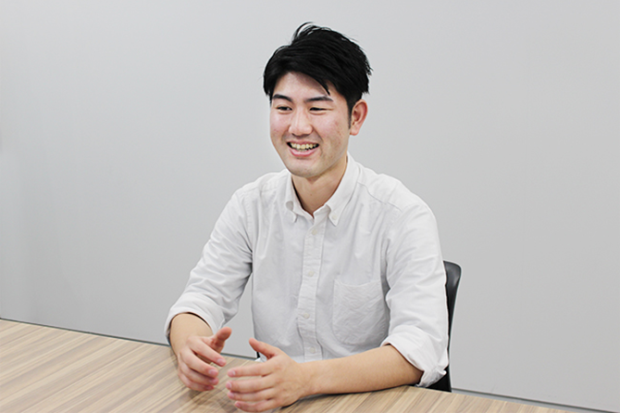 Q> What kind of exhibition was RETHINKING TOBACCO?

Koji> We created an exhibit of an 'inter-family grafting' technology developed by GRA&GREEN Inc., a startup company specialising in biotechnology.

I got to know some members of GRA&GREEN through a program called Todai To Texas, which supports The University of Tokyo students and graduates exhibit their startup projects at SXSW. I was a director of that program when I was a university student.

Grafting is a traditional technique for improving the quality and resilience of a plant by cutting its stems, branches, or other parts and then joining them together with different plants. When growing vegetables, for example, farmers aim to make better varieties by joining the stem of a plant that produces good quality vegetables with the stem of another plant that produces strong and robust roots.

Until now, the plants that could be grafted together were limited to genetically close varieties. GRA&GREEN’s technology, however, enables all families of plants to be grafted. Interestingly, this is made possible through the use of tobacco plants. That means tobacco will no longer be used just to make cigarettes and cigars - it can be used as a raw plant material for grafting.

Specifically, tobacco stems are used as the intermediary material between the plants that are intended to be joined together, enabling unrelated families of plants to be grafted. By applying this technique, it may even be possible to grow various types of fruit and vegetables on a single tree. Furthermore, by grafting plants that are resilient enough to withstand barren environments, people will be able to grow vegetables and other produce in places where cultivation has been impossible, such as deserts. That may provide a solution for food shortages in the future. 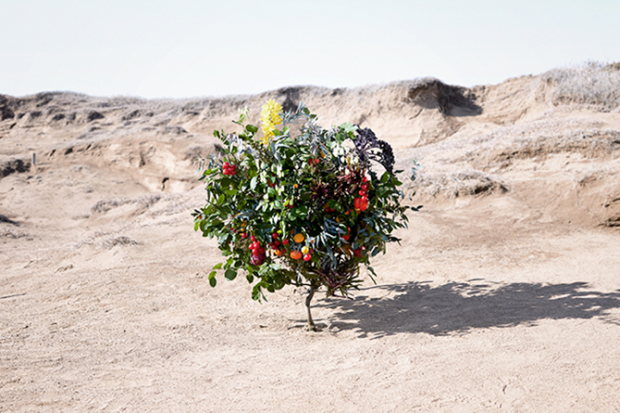 An image of a tree growing various types of produce, made possible by inter-family grafting

From the outset, we had to determine how to present this grafting technology to people attending SXSW. For example, while everyone knows about tobacco, we named the exhibit 'RETHINKING TOBACCO' to draw attention to the surprising new usage of the plant as a means to stimulate interest in the project.

When thinking about the content of the exhibit, we focused on the gap between technology and people. Therefore, instead of just presenting inter-family grafting as a 'unique technology', we considered how to get visitors to personally relate to the technology, which might appear, at first glance, to be irrelevant to many people. If we could succeed in doing that, the exhibit would encourage visitors to take a closer look at the technology and research, and even create opportunities for gaining support in the future. I paid close attention to those issues while planning the exhibit.

Q> What specific techniques did you use to realize that approach?

Koji> Firstly, we formed a team to produce the promotional video, but rather than describing the technology throughout the whole video, we emphasised the vision behind the project. The world’s population is projected to reach almost 10 billion people by 2050, so there are concerns that food crises will become very serious. GRA&GREEN’s technology could lead to a solution for those problems.

It would be hard to keep people interested just by explaining the grafting technology itself, but if we started by highlighting a problem that will actually have an impact on everyone’s future and then tell them about a potential solution, I thought we could make this technology seem more directly relevant to people’s lives.

It required a substantial amount of time to refine and flesh out a presentation of GRA&GREEN’s commitment to global issues and technological approach. We held countless meetings and cooperated very closely with each other. Creating English copy that could concisely explain the complex technology was also a very tough challenge, but we worked as hard as we could to get the job done.

In addition, we assumed that most people would not be familiar with grafting. Therefore, we set up interactive displays that allowed visitors to virtually experience grafting and learn about it in an intuitive way. That was another method of narrowing the gap between technology and people.

On a large display showing a barren tree, various fruits and vegetables would appear growing on just that one tree when people held a tobacco stem up to it. We also displayed a message describing the ultimate vision of the project in the end of this virtual grafting experience. 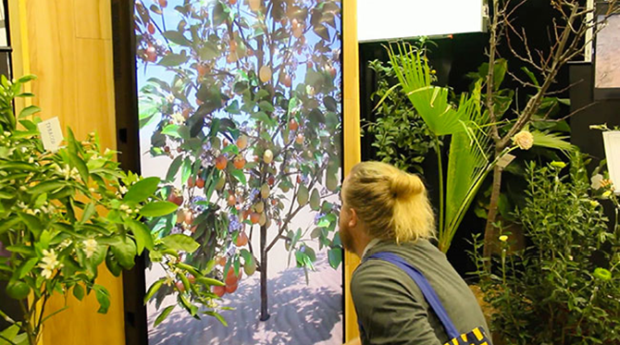 Actually, I also had a chance to exhibit at SXSW when I was a university student. From that experience, I learned that SXSW is not just a place to display a technology; it is also a venue for demonstrating how we hope to achieve something in the near future by applying that technology, and what is necessary for that purpose. With that in mind, we laid out a clear vision as the basis for presenting and explaining the grafting technology, and aimed to attract more people to support and collaborate in the project.

Aspiring to demonstrate how useful technologies can benefit many people

Q> How will you apply the things you learned at SXSW in your career going forward?

Koji> Ideally, I want to plan projects that bring people closer to technology. That is reflected in my job title of technology planner. That title is the first thing people know about my role in the advertising industry when I give them my business card, and it allows them to immediately understand my specialisation and interests.

The advertising industry excels at creativity, but having studied engineering at university, I realised that such creative capabilities are needed in manufacturing as well. The manufacturing process can be divided up into the broad stages of planning, production, and promotion. At the planning stage, for example, creative ideas are invaluable for deciding on what product to make and the purpose of making it. Then after the product is produced, creative ideas can be useful for determining how to explain the product’s purpose to consumers and how to promote the product in the market.

Creative ideas are indispensable for determining how useful a technology can be, and how it can benefit many people, as was the case in the RETHINKING TOBACCO project. How can we get people to take notice of the technology, and how can we make it relevant to their lives? Our job is to clearly provide those answers. Based on a clear understanding of the approaches and ideas of various creators, including engineers, designers, and researchers, we have to explain the technology in ways that potential users and general consumers can easily relate to. I want to be a person who can navigate between the perspectives of both the creators and the users.

My area of study at university was KANSEI engineering, which aims to incorporate the positive emotional responses of users into the design of products. It is an academic field that deals with very abstract and sensory concepts, but its research findings are still relevant to my work today, specifically research that focuses on emotional responses and considers communication among creators and users.

In addition, I share a house with a game developer, mechanical engineer, and communications designer. They are people who love to create things in each of their respective areas of expertise. When we invite our friends over for a get-together, I have a chance to listen to the opinions and views of various different people. I enjoy such opportunities for people to broaden their interests by interacting with each other.

To be honest, I really like manga and content featuring Japanese idols. I must have over a thousand manga books piled up in my room. I am motivated to work on projects involving manga and idols because I am such a big fan of them. By combining technology and content, I hope to come up with ideas for experiences that no one has ever had before. I would be very happy if I could help give people a variety of experiences that bring them closer to technology.

This article was originally published on the Dentsu website