How Covid-19 is Destigmatising Virtual Life

72andSunny Amsterdam's Charlotte Rubesa delves into the virtual spaces that are feeding our connections with our passions and each other.

History tells us, all of the worst past crises have supercharged the most important societal movements and technological innovations. From WWI making way for the Suffrage, a time when women fought for their right to equally participate in society, right up to the Great Recession of 2008 - which fuelled the emergence of the experience economy by the likes of Uber and Airbnb.

And while this pandemic is a breed of its own, just like any other crisis it begs the question and constant speculation of how our relationship to the world around us is changing. Covid-19 is taking an especially high toll on our social lives. As we’re required to work and play entirely from our homes, we are finding new platforms, forums and feeds to connect with each other and our passions - all in the virtual space.

Collective Virtual Experiences and their place in The Metaverse

I’d define a Collective Virtual Experience as one where a group of people simultaneously participate in - or attend - a live event or experience online.

What’s exciting is that CVEs could make up what author Neal Stephenson called the ‘Metaverse’ in his 1992 novel Snow Crash. The Metaverse refers to a post-internet era where the lines between digital and physical worlds are blurred and where Epic Games' Tim Sweeney envisions that everybody can contribute and nobody is in control. According to Matthew Ball, one of the attributes of the Metaverse is that it’s “populated by ‘content’ and ‘experiences’ created and operated by a wide range of contributors, some of whom are independent individuals while others might be informally organised groups or commercially-focused enterprises”.

In lockdown, we’re replacing moments of tradition and ritual with an online equivalent, at scale - from graduation ceremonies held in Minecraft, to a zoom-hosted wedding, to a child’s birthday party in Roblox. The role for these CVEs then is simply to act as a placeholder for the real thing, giving us some sense of social satisfaction while we wait.

But what happens to mass experiences and events that are very much made, or at least highly amplified by the crowd and the vibe IRL? Having spoken to both organisers and participants of the most unique CVEs around sports, art and music since lockdown, there seem to be a few big wins that come with experimenting with a virtual format.

A Collective Virtual Experience can broaden your core demographic

As Tomas van den Spiegel, CEO of Flanders Classics, told me about the fragile ecosystem professional cycling has compared to other high-performance sports - ranging from target demographic to lack of financing - he said his team was already exploring the question of how to translate this ageing sport into a product that might attract younger crowds. The solution was accelerated by a Covid-19-canceled race and took inspiration from eSports. De Ronde 2020: Lockdown Edition was a shorter, live-streamed version of the famous Tour of Flanders where 13 pro riders went head-to-head from their living rooms while their avatars brushed shoulders on the virtual course in real-time.

“My eight-year-old at home watched the full one-hour race while normally he’d maybe watch the highlights,” Tomas noted. What made the event so unique and enthralling to watch, especially for a younger audience, was the combination of the high-performance sport with all the best elements of a gaming environment. Athletes had to put in the physical effort to make their avatar move, as opposed to using their thumbs on a controller.

“Some athletes claimed it was the hardest race they’ve ever done”, Tomas recalled, as riders were unable to gauge their opponents as easily, and they missed out on the boosts of energy they would get from IRL crowds.

A Collective Virtual Experience can remove all geographical boundaries

Just seven days after Nintendo’s Animal Crossing launched on the Switch, illustrator Stephanie Unger decided to host a socially distant exhibition on her island in the game. Due to the games advanced Custom Designs portal, Unger was able to design artwork, wallpapers and even custom hoodies, further setting the mood with lighting and her favourite tunes for the grand opening. “Creating something like that in real life would have taken weeks and would have cost me a lot of money” she told me. Hosting her own CVE allowed Unger to share the experience with, as well as connect with people in lockdown from all corners of the globe. 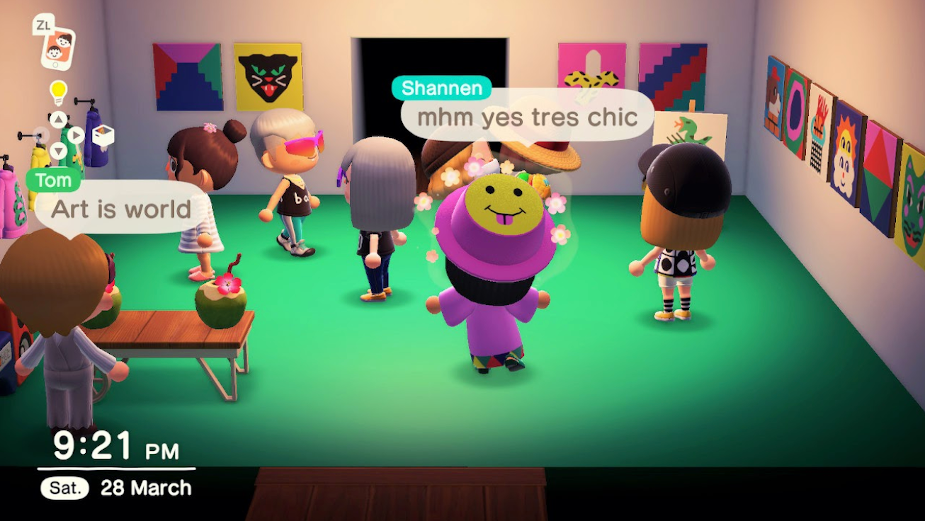 Maddy Hope, like Unger an illustrator and long time Animal Crossing player, spent an estimated 15 minutes wandering around the space and interacting - to a degree - with other players. While there was a chat box, the exhibition was “more of a visual experience than it was a social one”, she told me, as typing on the Switch can get quite clunky. Nevertheless, it left her curious for more: “It was the most unique thing I had ever seen. I wonder what’s next”.

Since, in AC we’ve seen everything from Hong Kong residents protesting for democracy to clothing shop Lazy Oaf running a contest to win redeemable vouchers. The lines between URL and IRL are blurring. Which proves that, like Fortnite, Animal Crossing is more of a place than it is a game.

DGTL Amsterdam (read ‘digital’) was well on its way to make festival history in 2020 by being 100% circularly-organised; everything from the sanitary system to the plant-based food menu and special deals on train travel to deter foreign fans from flying in for the event. Instead, DGTL became ‘Digital DGTL’ and made history anyways as the first fully virtual festival.

Like any other year, they had multiple stages showcasing a unique blend of both upcoming and established talent in the dance music scene. This year though, you could toggle from one stage to the other by the click of a cursor, without losing the time it normally takes to make your way through the crowds.

The festival worked with long-time brand partners Kornuit, ABSOLUT and welcomed Uber Eats on board this year to all play a crucial role in the festivals ’Virtual Bar’ and ‘Food Court’, where partygoers could get six packs and pizza delivered to their doorstep to keep them dancing in their living rooms till the early hours. This service added a complementary physical layer to the otherwise fully digital experience, proving that the two can coexist and that a virtual experience doesn’t mean a total rejection of all the things the physical world has to offer.

Collective Virtual Experiences - So, What’s Next?

As we write history, what’s certain is that the rewards from experimenting in this time are great; with failure being applauded for the courageous attempt and success being quickly imitated.

When the dust finally settles and we see a surge in new media and entertainment concepts, we will learn that we simply cannot - and should not - attempt to replace our beloved sweaty festivals, intimate gallery openings or high-energy sporting events with an online edition. As illustrated with the CVE’s above, it’s somewhat possible to re-create a concept but it’s more difficult to re-create a vibe, with all its nuances.

While the current stigma around the virtual world is that it disconnects and distracts us from reality, perhaps this is the time it will be proven otherwise; it’s a place for connection, creativity and community to flourish in new ways. The next frontier then becomes crafting these Collective Virtual Experiences from the inside out - adopting a virtual-first approach to our passions and the community around them without attempting to compete with the physical. Instead, we build a ‘URL’ layer into or around the ‘IRL’ experience, augmenting both in the process.

While we try to imagine what the future of large events and gatherings will look like, we can’t know for sure. But with the music industry bracing for a year without live concerts, it’s a good time to experiment with CVEs beyond the go-to IG livestream.

And well, as we desperately miss the intangible feeling of human contact, do CVEs have a role to play at all when things go back to normal? To help answer that, I’ll simply refer you to professor Scott Galloway’s wise words: “After Covid-19, things won’t change as much as they will accelerate”