How Could Virtual Reality Change Politics?

The Influencers 3.6k Add to collection
INFLUENCER: Sol Rogers, CEO & Founder of REWIND, explores the effect VR could have on public political discourse 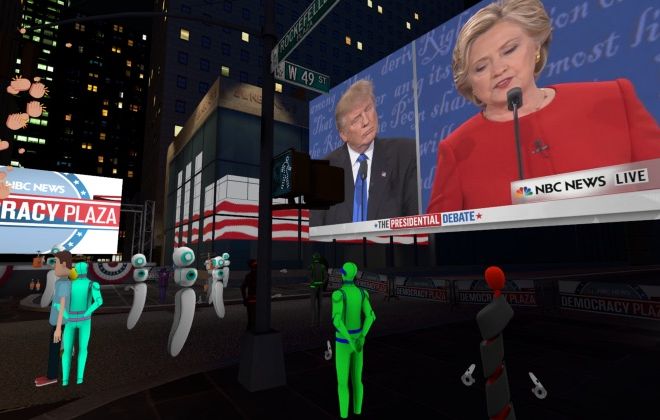 Politics and technology have become intrinsically linked, with widespread political activism taking place on social media sites such as Twitter, and politicians embracing new formats such as Periscope and Facebook Live. It’s fair to say that it’s never been easier to share your political views with people who both agree and disagree, but what impact could this have on the democratic process?

One of the more unexpected applications of VR and 360° video, is its use in the world of politics. Politicians, activists and journalists have utilised VR in a variety of ways, transporting viewers to new worlds and unfamiliar settings. But why are they doing this, and what effect could it have on the public political discourse?

How are politicians using VR?

Politicians always try to adapt to new forms of media to allow them to connect to their voter-base. Just see Franklin D. Roosevelt’s “Fireside Chats” in the thirties, John F. Kennedy’s early mastery of television in the sixties, or Donald Trump’s use of Twitter for examples. Adoption of modern communication forms has arguably never been as important for politicians as it is today.

In this context, it is no surprise that some politicians have adopted VR. Recently, Barack and Michelle Obama collaborated with some former staff of New Zealand’s legendary Weta effects house to create a 360° tour of the White House.

The tour is a unique peek behind the political curtain, allowing anyone with a headset to get inside one of the most exclusive addresses in the world and experience the property as if they were really there. This tour experience opens the world of US politics up a little to the average person who is never likely to be able to actually visit the White House. It brings people closer to a political system they may, or may not, want to align with.

It’s not just house tours that politicians have been utilising VR for. UN Secretary-General Ban Ki-moon travelled with a VR crew to ten countries affected by war or natural disaster in order to give viewers a glimpse into some of the most difficult living conditions on the planet. The video follows everything from refugees in Syria to the displaced people of the Democratic Republic of Congo.

Ban himself explained to Time magazine why this video is so important: “Virtual reality is a fascinating immersive technology,” he told the publication. “It has the power to make people perceive and feel one another’s reality and, in so doing, can help create empathy and compassion in a world that needs it more than ever.”

When it is used like this, VR could truly be the best way to unite a fractured world and encourage those more fortunate to help those less so.

Like all technologies, though, there is more than one way to use VR, and some of them may be less benevolent.

Is there a dark side to VR in politics?

The famously anti-establishment publication The Intercept recently ran a feature called ‘The Dark Side of VR’. In a less-than-optimistic way, it detailed the ways in which political organisations could misuse VR as a part of their mass surveillance plans.

The article points out specific wording from Oculus’ privacy policy that allows the Facebook-owned firm to gather information on its users’ physical movements. Ostensibly, this is to “customise your experiences” and “market to you”, but as we have seen before with several large corporations, this kind of marketing data is often requested by governments. Because of this, the Intercept has concluded that VR could lead to the “most detailed, intimate digital surveillance yet”.

Still, since we are yet to see evidence of any government agency receiving VR users’ data from any firm, it is safe to say that VR’s more positive possibilities are the key areas that are being explored at the moment.

How is VR changing activism?

It is not just Ban Ki-moon who is using VR to put viewers in the shoes of the oppressed and troubled. VR is increasingly becoming an effective tool for activists.

Virtual reality can change what a person sees, how they think, what they feel and even how someone behaves, in part because we believe it to be ‘reality'. Which is how VR has been used to treat conditions like autism, PTSD, depression and paranoia; offer pain relief and even promote recovery in paraplegics. VR and MR are being used to change lives for the better.

Clouds Over Sidra, a VR documentary aimed at generating empathy with Syrian refugees by placing viewers in their shoes, raised an astonishing $3.2 billion to help end the crisis (double what was expected) when it was screened at a UN fundraiser in Kuwait. This is what caused the UN itself to invest in more VR projects in the same vein, like Ban’s above.

Journalists at the BBC, too, have worked on a project that gives viewers a realistic insight into the refugee experience in an animated retelling based on actual events. At the Guardian, journalists, ex-prisoners and developers collaborated to make a VR representation of the effects of solitary confinement on the human mind with the goal of building sympathy for those in prison, and to start a movement against the practice.

Shared perspective breeds understanding. VR can, and will, drive compassion, allowing us to feel and understand more, through being exposed to situations and places that we otherwise would never experience. With projects like this in place from journalists and politicians alike, VR might just change politics for the better, and for good.