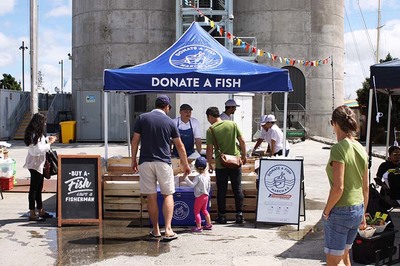 Case Study: Earlier this year Coastguard Northern Region and DDB New Zealand pioneered a new way to raise funds for the life-saving organisation. Instead of asking the donation-fatigued public for spare cash, they asked boaties for a donation much closer to their heart - their freshly caught fish.

Coastguard is the only emergency service that operates on the water, saving thousands of kiwis' lives every year, but as a not-for-profit, non-government organisation they are heavily reliant on the generosity of the New Zealand public to maintain operations.

To help make sure the organisation's fundraising stays relevant and continues to get in front of the right people - boaties and water users - DDB New Zealand worked with Coastguard Northern Region to trial an innovative way to raise money...without collecting money.

The Donate a Fish campaign took Coastguard's volunteer teams to some of Auckland's busiest marinas with ice chests, asking boaties returning from their morning fish to donate a portion of their haul.

The donation activation happened on a single Saturday with teams operating over the peak hours that fishos returned to shore, interacting with hundreds of kiwis out enjoying the water who were willing spare some of their hard-earned catch.

By the time the Donate A Fish volunteers headed home, the coolers were packed full of donated fish including local favourites like Snapper, Tarakihi (and even the odd Kingy) - all of which they sold  the very next day at the special Coastguard fishmonger stall located in Silo Park's Sunday produce market, with all the money raised going to directly to Coastguard.

"There are currently 30,000 charities operating in New Zealand, which is one for every 160 people - a higher ratio than the US, UK or Canada," says Damon. "So, for charities which rely on donations from the public, like Coastguard, they need to do something that stands out while also going directly to the people that care about their cause - not just anybody walking by on their lunch break."

Georgie Smith, Coastguard Northern Region Marketing and Funding Manager, says the Donate a Fish fundraising initiative was a fresh and engaging new campaign that was a top match and something really relevant for the kiwi boatie, giving them a way to make a difference and help Coastguard.

"We were thrilled with how generous boaties were on the day," says Georgie. "It's a great new take on community fundraising, supplementing the tried-and-true with something fresh, new and with the potential to scale up each year."