How Brands Should Handle the Brexit Debate

CEO of RKCR/Y&R Jon Sharpe on how brands can ride the post-referendum storm, no matter which side they picked 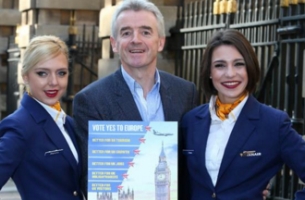 Classically, the role of a brand is to make choices easier for people. It’s to provide trusted guidance in situations where it’s impossible for us to do enough research to know the best decision.

But this is in reference to a brand's particular domain, to its own individual market, so while consumers may hope that an authoritative commercial or corporate brand can tell them what to do in the Brexit debate, should we as individuals really trust their motives when we are deciding which way to vote?

Ryanair’s ‘Yes’ campaign was launched this week to persuade consumers to stay in the EU. It focuses on the benefits our membership status has on jobs, growth, tourism and holidaymakers. CEO Michael O’Leary believes a Brexit will cause foreign inward investment to decline and the UK economy to be hurt for around four years.

But what will it mean for his brand? The CEO of Ryanair’s rival, easyJet’s Caroline McCall, has been more vocal about what a Brexit would mean for budget airlines and the impact it would have on travellers.

Since the introduction of the single aviation area, passengers have seen ticket prices drop by around 40% to travel across Europe, while routes have increased by around 180%, according to easyJet’s own calculations. What would a Brexit mean? The death knell for budget airlines, potentially, and, for consumers, a return to the days where flying was "reserved for the elite," says McCall.

Wading in on the Brexit debate poses a clear risk for brands if they choose to express a political view, as there is always a risk of taking the ‘wrong’ side depending on the outcome of the referendum.

It risks damaging consumers’ and shareholders’ perceptions of the brand and its core expertise. We know from findings in neuroscience that humans make most purchase decisions extremely quickly and largely based on emotions. If we know that a brand disagrees with us on a major issue such as Brexit, where feelings run very high, it can go so far to make us question the brand’s product or service as a whole.

From experience on brands like Bank of Scotland, large organisations that cater for both ‘yes’ and ‘no’ voters tend to avoid political allegiance when it comes to a referendum.

Unless the political matter is central to your brand positioning or what you do, taking sides risks alienating consumers that disagree with your positioning. But that hasn’t stopped HSBC from warning that a Brexit could wipe 20 per cent off the pound, after it crashed to its lowest value in seven years.

The overall argument coming from brands is that an exit from Europe would be bad for business and bad for consumers as a result, and for those that choose to get involved, it seems the only safe route to take.

This week 36 FTSE 100 retail bosses signed a letter supporting the Prime Minister’s stance, including the chief executives of Asda, Anne Summers, Burberry and Kurt Geiger. Ultimately, commercial brands have bigger consequences at stake than corporate brands like Unilever or Tata, as the outcome is likely to affect their consumer sales – especially on the high street – and can, in fact, demonstrate conviction and direction to investors.

But consumer brands sitting it out on the fence could be at risk of losing their positioning to a competitor who happens to nail a Brexit campaign.

If brands want to maintain a neutral, but continuous, presence in the debate, perhaps their best choice is to become the Brexit umpire. Become the trusted, independent information-providers, offering a guide to the issues on both sides. Brands such as Paddy Power, Specsavers or Kit-Kat could easily take the role of a clued-up part of our national culture without having to take a political side.

All in all, for the brands getting involved in the Brexit debate, if they stand true to their core values and are transparent in their business case, they should be able to ride the post-referendum storm, no matter which side they picked.

This article was originally published on Marketing Magazine.