Campaign to get gamers to give blood heads to Indiegogo 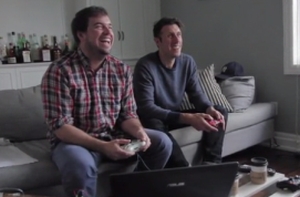 Last month, two entrepreneurs took time off from their full-time advertising gigs to create an awareness campaign to engage one of the most apathetic demographics there is (gamers) to get them discussing an issue they didn't know they already cared about – blood donation.

The project is called Blood Sport and was launched on Kickstarter with a simple elevator pitch: Raising the stakes of gaming, by making it so when you lose blood in the game, you lose it in real life, too. Click here to view the Kickstarter video.

The campaign went bonkers. To date, the campaign amassed over 660k+ video views, 62 million + twitter impressions, 1.74m + retweets and 39 backers – that is, until Kickstarter suspended the project.

With the suspension from Kickstarter, the campaign is now currently in the process of discussing partnerships with blood banks worldwide before a planned relaunch with Indiegogo. And, most recently have been approached by an organization in New Zealand who have asked to launch the program there.