Editors' Choice: Directors That Go shoot a feat of incredible speed through Friend 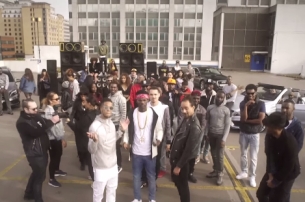 To inspire people to make the most of their lunch hour, the brand challenged UK rappers Chip, Kano and Wretch 32 to produce, shoot and edit a music video in just 57 minutes. The campaign builds on KFC’s existing “Pack more into Lunch” platform, which promotes KFC’s growing lunchtime offering.

Shot in a multi story car park in London, the 4-minute high-energy music video was filmed in two halves using a single drone camera and Movi rig across the three-floor set-up. The fast paced film was captured in 50 minutes and then edited onsite in 7 minutes – a total of 57 minutes for a process that would usually take a couple of weeks.

The music video will live on YouTube and is being supported with Social, PR and VOD activity. KFC also secured a UK first to launch a supporting Snapchat campaign with Skysports, being the first ever fast food brand to advertise on the platform. The activity targets a hard to reach younger audience.

The video is for Chip’s latest single “Feeling Myself” – a challenging new collaborative project that sees the double MOBO award winner team up with Kano and Wretch 32.

Hamish Pinnell, Creative Director at BBH said:  “This campaign was a great opportunity to expand upon the existing ‘Pack more into Lunch’ platform and open KFC up to new target audience. Creating a music video in a lunchtime was an exciting challenge. Not only did we pull it off, we also set a new world record.”

Chip said “With everything I do I work hard and try my best to bring unique creativity and great energy. KFC's collaboration with my company Cash Motto has all that to bring a vibrant visual.  We’ve filmed, produced and edited my entire video for Feeling Myself in an hour to show our fans how much can be packed into 60 minutes. An hour is the time most people are given for lunch each day right? We wanted to show what an hour can offer when you seize the opportunity to do something creative.”