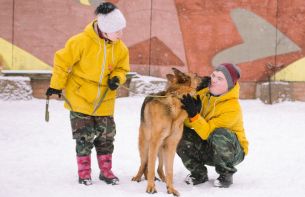 Unfortunately, a large part of Russian society rejects people with Down syndrome. It is believed, they can’t work, so employers don’t hire them. Only four people with Down syndrome are officially employed in Russia – inexcusable statistics for a country of 146,000,000 people. It means adults have no chance to live a full life. This is one of the most pressing social problems in Russia, which is totally ignored.

BBDO Moscow was inspired by the Pedigree global creative campaign ‘Feed the good’, which is based on a simple idea that dogs bring out the good in people. Using this insight the agency showed the incomparable importance of dogs in human life. Taking a fresh look to the Pedigree mission – care about dogs' health and welfare – the ‘pUp syndrome’ project helped to tell that dogs are more than just animals – they are our friends, which never notice any disabilities and accept everyone the way they are.

During the project ‘pUp syndrome’ 5 participants were visiting the Dog Training Centre and the hotel for dogs – a place where animals are in need of special attention and care because they are away from their owners. Young people learned how to work, to be independent and responsible caring for the animals. Dogs helped them to become more self-reliant and executive. It became the First Professional Adaptation Programme for people with Down syndrome in Russia.