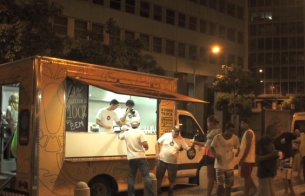 Every month, 16 tons of food are wasted at Rio de Janeiro restaurants. Of that food, 80% is wasted during food preparation, which means that it is still in good condition for consumption. The problem is that if this food were consumed quickly, it could feed thousands of people.

As a result of this information, Africa created the Feed Truck for the Make Them Smile NGO. With the mobility and agility of a traditional Food Truck, Feed Truck transformed food waste into sustenance for people living on the streets. The institution had already been making weekly donations, but without the truck. The agency in Rio created the project and could get the truck in partnership with TruckVan, a car body manufacturer.

The Feed Truck works like this: food that would be wasted was collected at high-end restaurants like Sudbrack, Venga!, Lasai, Confeitaria Colombo, among others, and meals were prepared and distributed on the streets.