Trends and Insight 313 Add to collection 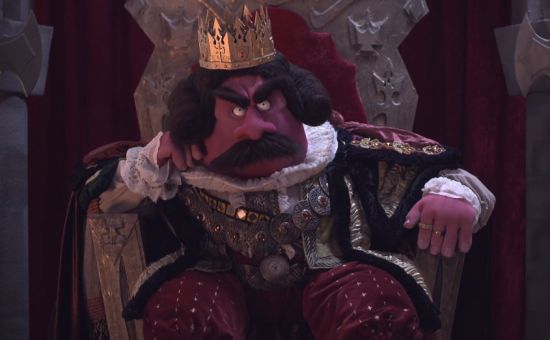 Think cartoons are just for kids? Of course you don’t. You’re a media-savvy, urbane consumer and creator of popular culture. And you know fine well that shows like Adventure Time and platforms like Adult Swim have given mainstream, grown-up audiences an appetite for the weirder and more wonderful end of the animation spectrum. The kind of quirky new talent that traditionally found (and continues to find) love among music video-loving hipsters and novelty-seeking creative directors is finding a new home with content-hungry broadcasters. And that is good news for animation companies.

London-based Blink is one production company that’s spotted an opportunity in the public’s evolving and expanding animation tastes. Two years ago James Stevenson Bretton, the executive producer at Blinkink (Blink’s animation arm), set up Blink Industries, a development hub for new IP and non-advertising projects. While the remit encompasses everything from apps to books, the greatest traction they’ve found is in developing entertainment content for TV channels like Nickelodeon, Cartoon Network and Disney and online broadcasters like Amazon Prime.

“People are into weirder things because they’re exposed to it. I know lots of people who are watching BoJack Horseman who would never have watched an animated show before,” says James, who has found that TV execs have been surprisingly open to the stranger, often darker, ideas and styles that agencies and brands might shy away from. Indeed, it was the head-melting Don’t Hug Me I’m Scared, a series of lysergic mixed-media shorts developed at Blinkink with directing duo Becky & Joe, that ended up opening several doors for James when he first took Blink Industries out to the States (fans rejoice - the fourth episode of DHMIS is set to be released imminently).

For James, Blink Industries is a continuation and evolution of Blink’s commitment to nurturing – and keeping – young talent and it’s all about the long term investment. Commercial production companies often use some of their advertising revenue to fund music video projects for their talent to get stuck into and promos are still a great nursery for up-and-coming directors, but opportunities in TV feed their ambitions in new ways.

“The partners at Blink are incredibly supportive. We have a generous – though not limitless – development fund. It means we can support great talent and not see them go off to Nickelodeon,” he says. “We’ve got a real heritage of getting young people at the start of their career and that’s been really instrumental in building the Blink brand.”

Crossing from advertising to broadcast has been a real education for James, especially given the kind of bombastic names he’s been working with. Development is a slower process in broadcast and budgets are lower, but the sense of ownership and collaboration is far higher than most advertising projects. There’s often just one client to negotiate which means there’s none of the complex juggling act production companies usually have to do to balance the demands of agency producers, creatives, account execs and end clients. “It’s much more of a collaboration. Unlike in advertising, the idea is ours and they’re respectful of that. In TV the buck stops with us, and that’s exhilarating.”

On the flip side, an extensive experience in the advertising industry has given James and the Blink Industries team a few unexpected advantages.

“Advertising is an amazing training ground. You learn diplomacy. I must have sat in thousands of pre-production meetings, explaining to a marketing person why a cup is red and not blue. So when you’re sitting with the head of comedy at Cartoon Network trying to explain your idea, all that experience really helps,” says James. “And because we have to work so hard to win TV commercials we’ve become very proficient at putting together treatments. They’re probably better than most people in the broadcast side of the industry have seen.”

The advertising experience also gives companies like Blink a distinct advantage when it comes to the raw new talent that channels are looking for. James theorises that the culture of bringing on young filmmakers after university and nurturing them by feeding them music video projects or putting them to work supporting high profile directors is something that is less common in the United States. In the USA, he says, TV execs are poaching first and second year students in the middle of their degrees at schools like Cal Arts – in the UK and Europe they’re finding filmmakers in their twenties who have already spent time learning from great directors, cutting their teeth on promos and learning the complex interpersonal dance of collaboration.

And it’s all starting to really come together. Blink Industries’ first big project, a live action puppet show called The Grumpy King for Cartoon Network, was nominated for a Bafta and it’s been renewed. There are also some interesting-sounding projects in the pipeline, including two pilots of Nickelodeon’s shorts season, a show that’s in development with the Disney Channel and a Channel 4 pilot directed by Elliot “Bear and the Hare” Dear, starring Adam Buxton and Graham Linehan.

One interesting thing that transpires from speaking to James is the way that established TV broadcasters are spoken of in the same breath as online channels like Netflix and Amazon Studios. The likes of FX and Cartoon Network and the Adult Swim stream have been pioneering adult-orientated, edgy animation for years; Cartoon Network launched their Adult Swim stream in 2001 with titles like ‘Harvey Birdman: Attorney at Law’ and ‘Sealab 2021’. However these series were still pretty niche, fodder for stoners, nerds and hipsters. A newer generation of shows that launched around the beginning of this decade (Adventure Time launched in 2010, Archer had its pilot season in 2009) found a broader audience for their brand of strange and, at times, obscure brand of humour – thanks to the mainstream embrace of nerd culture and the proliferation of online platforms, which have found a global audience for shows that might have previously dwindled in niche late night slots on US TV. In turn, these online platforms have started to seek out and develop content of their own. The likes of Amazon Studios and Netflix are much speedier to commission new pilot shows; they can then use audience data and algorithms to determine which shows are likely to flourish. And what that means is that they’re also more relaxed about taking risks with wackier pilots. The same data-crunching obsession with research that has led many an advertising creative into deep frustration has triggered a looser approach in entertainment.

Curiously enough, James reckons this boom in inventive, boundary-pushing TV is inspiring a similar growth in animated advertising. “I think there’s a real renaissance in animation. There are some great scripts knocking around and creatives are really getting into it.”

The explosion of edgy or unusual animation styles in TV looks like its filtering back into advertising. As audiences become more open-minded, so too are adland’s decision makers. It makes sense, a similar phenomenon can be seen in CG animation as brands seek to capitalise on the popularity of Pixar and DreamWorks blockbusters. But now the flow between advertising animation houses and broadcasters has become bi-directional. After all, there’s no shortage of talent in the world of commercial production and, as James’ work with Blink Industries shows, there’s also a real appetite for it among TV executives. So what will happen next? I guess we’ll have to stay tooned.