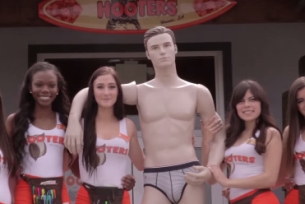 How does a small French underwear brand with no money launch in the US?

If you’re Le Slip Français, you turn to KickStarter. You shape a story around the universal image of the “French lover” and invent Léo, a Slip Français underwear mannequin, who falls in love with Sherry, a Californian beauty.

The two meet during Paris Fashion Week and it is love at first sight. But soon, Sherry is taken back to L.A.

To reunite with his beloved Sherry, Léo asks for help on Kickstarter. He needs 30K to open the first Slip Français shop in L.A., where he can live happily ever after with his sweetheart.

But how do you get Americans to invest in a plastic mannequin’s Kickstarter love story, for a brand they’ve never heard of?

You pack Léo’s extra arms in the boot and send him off on a crazy road trip across the US. He meets people, gets media attention and raises awareness of the Slip Français brand overseas.

In a way, the love story became a metaphor for a small French underwear brand’s big American dream. People invested in the project by purchasing the limited collection on KickStarter to help Léo, and followed his adventures on his very own Facebook, Twitter and Instagram accounts.

He reached the 30K and the L.A. Pop-Up store was a success – Le Slip Français earned a lot of attention in American media.