As the first major purity initiative, 42Below is starting with the drinkers and tackling the not-so-critical issue of cocktail-garnish-waste, as only it could. 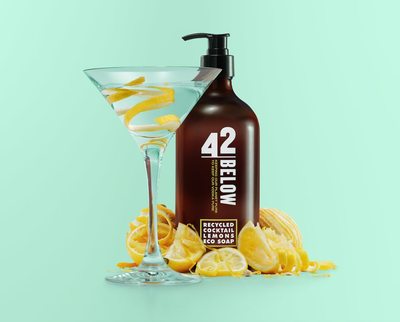 People down under used to think of 42Below as the funny vodka. But what few people realised is that this home-grown vodka also happens to be the purest on the planet, because it's made in clean, green, super pure New Zealand.

But drinkers had forgotten, and bartenders no longer had a reason to pour it. Colenso BBDO had to give them a reason. So, Colenso gave 42Below a new mission. A mission to keep the planet pure, to keep the vodka pure.

To do that, 42Below is making the purest, cleanest thing there is; soap. But not just any soap. 42Below Recycled Cocktail Lemons Eco Soap. A soap made from the used lemon at the bottom of customers' drinks. The perfect vehicle to tell 42Below's story at the place that matters most; in the bar.

Now, instead of throwing away all the leftover bits of lemon, bartenders collect them, and together with the Botanical Distillery, they're distilled (coincidentally, it's much the same as distilling vodka), then turned into a 100% pure, eco-friendly hand soap.

The soap is then returned back to the bars - bottles for bathrooms and sachets free with every drink, each reminding drinkers (and bar staff)

of how super pure the vodka is, with a healthy dose of 42Below cheek. So, no matter what drinkers are drinking, they've got 42Below in their hands - many for the first time in years.

The soap in bar is supported with content, social, PR, in bar media and targeted outdoor, ensuring drinkers know the story long before they get to the drinks list. And they do know

about it - lots of them. So far, over 43 million drinkers have been reached through PR and social alone.

Says Dave Brady, Colenso BBDO: "It seems like a ridiculous thing to recycle leftover bits of lemon from people's drinks, and it is. But that's also the genius. The soap opens the door for 42Below to tell its purity story at the bar in a 42Below way, and creates a conversation

with the bar staff where there was none. If we can give them a reason to recommend our vodka over the rest, we've won half the battle."

Says Jill, head distiller at the Botanical Distillery: "This is the first time we've distilled from secondhand fruit, or things people have put in their mouths. But the process is essentially the same, and when we're done, we've created a completely sterile, slightly alcoholic lemon extract."

To date, 42Below has made close to 30,000 units of eco soap with recycled lemon bits from bars across Sydney, Melbourne and Auckland. And so far, the results are proving overwhelmingly positive, with a 20% lift in bars sales. In fact, in many bars, 42Below is moving more product than ever before, and have re-established the brand in the minds of drinkers (and bar-staff) who had all but forgotten what it stood for. But, it's been moved forward. It was the funny vodka. Now, it's the funny, pure vodka.

42Below. Keeping our planet pure to keep our vodka pure.