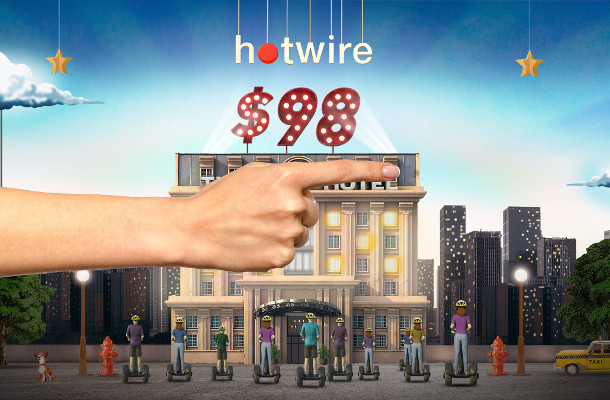 Hotwire, a leading online travel site, today announced its biggest sale of the year, addressing the travel woes of millions this Fourth of July, which for the first time in six years inconveniently falls on a Wednesday. The Hotwire Effect XL Sale gives travelers the ultimate freedom to book participating 4 or 5-star hotels the weekend before, during, or the weekend after the Fourth of July holiday for a set price of just $49 per night - an average saving of $157 each night.
"At Hotwire, we know how much everyone looks forward to celebrating America's independence with family and friends on the Fourth of July - me included! Since the 4th falls mid-week this year, it's harder for people to find the time to get away with family and friends, so we are super excited to give everyone the freedom to travel around the Fourth of July with our biggest sale of the year: The Hotwire Effect XL," commented Hotwire President Neha Parikh. "With this sale, travelers will be able to experience luxury hotels in America's hottest destinations for just $49 per night and they will have the freedom to travel the weekend before, during or the weekend after the Fourth of July!"
The Hotwire Effect XL Sale gives travelers the opportunity to choose travel dates between June 28 to July 8, making an extra-long weekend possible or even a short "staycation" if taking more time off of work isn't an option. During this time, travelers can book 4 and 5-star hotel properties in eight of America's most-traveled Fourth of July destinations according to Hotwire 2017 booking data. The Hotwire Effect XL Sale cities where travelers can find $49 per night values are:
- Austin (vs. average $179/night)
- Chicago (vs. average $169/night)
- Los Angeles (vs. average $179/night)
- Miami (vs. average $139/night)
- New York (vs. average $167/night)
- Orlando (vs. average $140/night)
- San Francisco (vs. average $189/night)
- Washington D.C. (vs. average $133/night)
"Offering luxury 4 and 5-star hotels for just $49 is truly an incredible deal which won't last long, so travelers need to act fast to feel the Hotwire Effect," continued Parikh, who noted that the booking window begins on June 26 and remains while supplies last. The fixed $49 per night fare applies to the first two nights of travel in the June 28-July 8 timeframe.
The sale epitomises Hotwire's simple, yet powerful value proposition: by hiding the name of the hotel until after booking, Hotwire allows customers to find 4-star hotels at 2-star prices. In this same spirit, earlier this month the brand launched its latest advertising campaign, "The Hotwire Effect." The campaign is aimed at reinforcing the brand's distinct ability to unlock the kind of deep value travellers will discover this Fourth of July holiday. The series of three spots features Hotwire's signature jingle and fun travel scenarios where high hotel prices are slashed while a giant finger masks the hotel name. The three 15-second commercial spots appear on NBC, ABC, Comedy Central, ESPN, CBS and HGTV, and can also be viewed online at www.youtube.com/user/HotwireTravel.
For more information on The Hotwire Effect XL Sale, or to book a 4-star hotel at 2-star prices, visit www.hotwire.com/xlsale.
view more - Creative