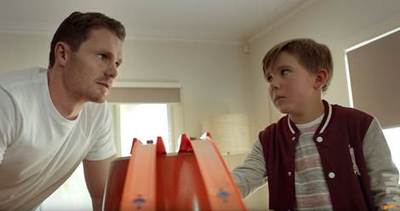 Bringing to life the Hot Wheels brand DNA - competition, experimentation and creativity - the TVC depicts an epic race as seen through the child's eyes, illustrating the excitement and thrill of playing with Hot Wheels, blurring the lines between reality and imagination.

The campaign was developed to continue driving the popularity of the Hot Wheels brand among the core target of children. The TVC gives meaning and relevance to Hot Wheels message of 'Make It Epic' in the Australian market.

With the child's imagination conjuring larger-than-life inclusions, viewers see motorsport commentators calling the epic race that is taking part on a track that snakes wildly around a kitchen and lounge room.

Says Richard Williams, creative director, Clemenger BBDO Melbourne: "As kids, we've all imagined the possibilities of the most epic track set up in our lounge room or kitchen. The only thing that could make this more epic is having your own commentators calling every loop, corner and drop."

Produced by Melbourne-based company Guilty Productions, the TVCs' local flavour is achieved through the inclusion of AFL superstar and Geelong Cats player, Patrick Dangerfield who joins the young boy in the epic home race. The 2016 Brownlow Medalist has also been named as the new Hot Wheels ambassador, succeeding Hawthorn star Luke Hodge.

Says Chedney Rodgers, marketing director Mattel on the brand's partnership with the AFL Players' Association (AFLPA): "There is a strong connection between the essence of the Hot Wheels brand and team sports such as Aussie rules. Through our relationship with the AFLPA we can reach children in a way that inspires them to be confident and resilient through the power of play."

The 30 second TVC launches on Sunday 16th April and will initially air for six weeks in two, three-week bursts.

The TVC, which talks to kids, is one component in a wide-ranging integrated marketing campaign that embodies the Hot Wheels 'Make It Epic' tagline, including amplification via digital channels, AFL industry publicity and consumer promotion driven through PR.

Product specific TVCs will also air throughout the year, focusing on the core Hot Wheels range, as well as new and innovative toys set to excite young kids across the country.