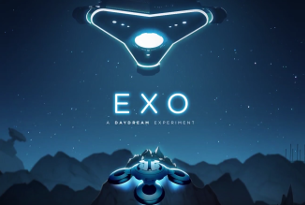 Digital creative agency Hook is launching its first exclusive game release for Google’s Daydream virtual reality platform. Exo is available as a free download from the Google Play VR store and will be featured on Android Experiments, a site which celebrates creativity and code on Android.

Exo is an immersive VR game where players pilot a futuristic drone around an unknown planet in order to discover and activate an ancient alien technology. The Daydream controller and headset allow full 360-degree exploration while honing players’ flying skills and precision to progress through the game.

"We’re focusing on developing VR experiences for the widest possible audience,” explained Michael Watts, Managing Director at Hook. "So we were thrilled when Google gave us the opportunity to be one of the first to prototype and build a game specifically for Daydream.”

Each player’s objective is to discover how to interact with the world through their drone and  activate dormant technology with help from a mothership that hovers above. The drone’s scanner gives clues about the connection between objects in the world and hints at where to go next. Players advance by making discoveries through 360-degree exploration.

Exo was born out of a series of prototypes Hook did on a stand-in Daydream development kit prior to the release. The goal was to explore possible uses of the controller’s unique rotational tracking and touchpad interface in order to build something that isn’t possible on other mobile VR platforms.

The app was created in the ever-evolving Daydream technical preview version of Unity. It utilizes the Google VR SDK and some of the latest features in Unity 5, such as physically based rendering and real-time global illumination. Daydream’s asynchronous reprojection technology was key to keeping the frame rate up while pushing the visual fidelity.

Exo is available for download on the play store here