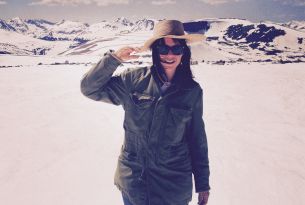 Bi-coastal production company Honor Society has signed director Molly Schiot for U.S. commercial representation. With nearly two decades of experience as a director, she approaches her work with a deep respect for the ubiquitous and mundane, telling stories that captivate and engage viewers from start to finish. Her versatile creative skillset lends itself to a broad range of creative aesthetics, ranging from illustration-driven tabletop work to authentic docu-style shorts, all driven by emotional storytelling at the core. She has worked consistently as a freelance talent and has also been signed with top production shops including Über Content and RadicalMedia, helming spots for top brands including Kiehl’s, Charter Communications, Nokia, JC Penny and Levis, among others. In her recent ESPN 30 for 30 short, “Our Tough Guy,” Schiot deftly dismantles the myth behind one of the NHL’s most fearsome players, John Wensink.

“Molly is driven by creativity in every single aspect of her life and that really shines through in all of her work,” notes Honor Society Executive Producer Megan Kelly. “She is a passionate artist and director and brings an authentic emotive element that really resonates in any genre or style.”

Raised in small-town New Hampshire, Schiot’s innate artistic calling led her to the prestigious Glasgow School of Art, and then on to Brown University. Following her studies, she leaped energetically into the world of commercials, music videos and film and never looked back. Schiot’s diverse creative endeavours have led to sold-out exhibitions of her paintings and drawings, music videos for the likes of Mark Ronson and The Raveonettes and commercials for Miu-Miu, Levi’s and Converse. Her “Check You Out” series for Paper Magazine, a collection of short films, features comedy duo Fred Armisen & Carrie Brownstien doing spoken word renditions of Danzig songs in front of Danzig’s house, A-list actress Malin Akerman getting her make-up done by a Swedish toddler and sombre singer Devendra Banhart pretending to pitch comedic pilots to a television network. She is also the creative force behind the Instagram account “theunsungheroines,” which has been adapted into the forthcoming book Game Changers. The book, published by Simon & Schuster, is a celebration of the pioneering, forgotten female athletes of the twentieth century that features rarely seen photos and new interviews with past and present gamechangers including Abby Wambach and Cari Champion.