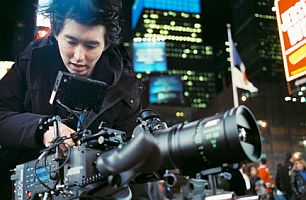 Bicoastal production Honor Society has signed director Jonathan Yi for U.S. commercial representation. Accomplished documentary filmmaker Yi is a revered talent in the documentary feature space, with his new film 'Mad Tiger' being heralded as one of the “Top 10 Documentaries to Watch” by Indiewire. 'Mad Tiger' will launch in select theaters on March 20th. The feature-length documentary follows two band mates, Yellow (Kengo Hioki) and Red (Kotaro Tsukada), best friends who have been touring the U.S. as part of the performance-art punk band called Peelander-Z for the last 15 years.
March is stacking up to be an action-packed month for Yi, with the documentary feature Goodnight Brooklyn: The Story of Death By Audio, on which he served as Executive Producer and Director of Photography, making its world premiere in competition at SXSW 2016.

In the commercial space, Yi fuses a talent for connecting with real people with an eye for visual storytelling in commercial work for such brands as American Express, Intel, Skype, Mattel and Wells Fargo, among others. He recently wrapped his first production with Honor Society, shooting Entyvio for BBDO.

Honor Society Executive Producer Megan Kelly notes, “Jon brings a strong visual storytelling eye to real stories in both his documentary and commercial work. He is truly able to make all of his subjects at ease and really get to the core of the authentic narrative. We are thrilled to have him join the Honor Society.”

“I am really passionate about connecting with audiences in all of my work, whether it be commercial work or features,” adds Yi. “It is refreshing to see how Honor Society is truly embracing the change in the industry and embracing the world of content and I’m thrilled to join the team.”

Yi’s HBO documentary series 'East of Main Street' has run for five successful seasons, with the most recent season starring Daniel Dae Kim and Lucy Liu. Originally entering the advertising space as a cinematographer, he has amassed an impressive commercial directing reel that exemplifies his knack for telling authentic stories for documentary pieces and scripted spots alike. He has taught several years of Advanced Cinematography at New York University’s prestigious Tisch School of the Arts. He has also shot music videos for such top artists as Paul McCartney, Twisted Sister, Poison, Daniel Johnson and Mates of State. His grasp on the craft from a technical perspective is vast, having consulted for Canon USA on the groundbreaking development of the Canon EOS C300, Canon’s first camera initially geared towards the documentary market. His promotional video for the camera went viral, helping launch the EOS C300 to quickly become the most popular rental camera in the world within its first year on the market.