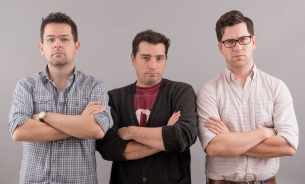 “Justin, Bobby and Alden’s background at UCB gives them strong improv comedy experience as well as access to some of the best young comedy talent in the country,” notes Honor Society Executive Producer Megan Kelly. “Their most recent project for Subway also illustrates their ability to get natural comedic performances out of real people. The non traditional perspective of a directing trio allows them to cover more ground while shooting, enabling them to create dynamic content.”

Ford and Tyler of Jetpacks Go! have been collaborating as writers and comedians for nearly a decade out of the famed Upright Citizens Brigade Theater, having written and directed both scripted and non-scripted television for the likes of Comedy Central, MTV, MTV2, FUSE, Nickelodeon and Fox Sports1. Webster brings a background in film to the trio, having written and directed shorts and commercials, as well as shooting independent feature films and the Oscar-winning short film “God of Love.” As a team, Jetpacks Go! has upcoming work for Honeywell, Stonyfield and Subway.