Honeybadger Animates the 'Beats of the Beautiful Game' for Pepsi 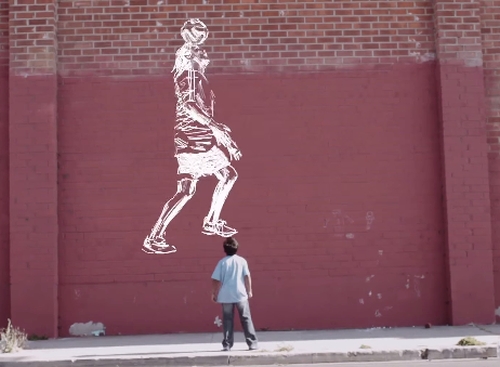 The short film, “Whoever We Are” by Grammy Award-winning producer/songwriter/rapper Timbaland and featuring Rachel Assil, serves as the score for the enchanting short film. To Bring this sweet football story to life, The Kolton Brothers use live action cinematography and animation, blending traditional hand-drawn rotoscope animation and digital motion tracking. View a behind the scenes video at the bottom of this page.

“This short film began with the simple concept of a boy and his love for the game of football, but the element of animation and imagination brings the film out of this world,” said Grant Kolton. “It is believable magic,” added Ross Kolton.

The “Whoever We Are” track and short film are the seventh release from the Pepsi Beats of the Beautiful Game album, leveraging the power of music and film to bring fans closer to the game they love. Alongside Timbaland and The Kolton Brothers, the project showcases an eclectic mix of rising and celebrated musical artists from around the world including Kelly Rowland, Janelle Monáe, R3hab, Rita Ora, Don Omar, Santigold and Jetta, alongside regional favorites Pearls Negras (Brazil), Jolin Tsai (Taiwan) and Hassan El Shafei (Egypt).

The album is part of the integrated 2014 Pepsi football campaign, which includes globally renowned players, a fashion collaboration and an immersive, interactive television creative called “Now Is What You Make It,” as it continues to deliver experiences to fans throughout the year that bring them closer to the game they love.

Title: “Whoever We Are” (from Pepsi Beats of the Beautiful Game LP)