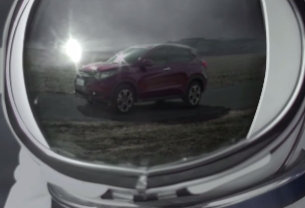 Honda has premiered its TVC for the brand’s new SUV: the HR-V.  The model is introduced with a cinematic film ‘Revolutions’, which positions the car as revolutionary in its category by juxtaposing the HR-V with some revolutionary events in history. The F/Nazca Saatchi & Saatchi campaign includes broadcast, cable television and print media.

Illustrating the concept “The revolution in your garage,” the film campaign illustrates how revolutionary the Honda HR-V is in the automotive segment: an urban SUV like no other on the market in Brazil, it arrives at a competitive price within its segment. It comes with the latest technology found only in luxury SUVs, particularly the electronic parking break, sporty design, comfort, spacious interior, and a multimedia dashboard with a 7” multi-touch screen, as well as other innovations.

According to Fabio Fernandes, President and General Creative Director at F/Nazca Saatchi & Saatchi, “The film was designed to be as aesthetically beautiful, seductive, and as modern as the HR-V.  And it is as grandiose as Honda’s plans to revolutionize this category. This excellent production, produced by Killers and directed by Claudio Borreli, reproduces epic scenes by meticulously reconstructing each time period. The Woodstock scene and Martin Luther King’s march on Washington are so faithful to the actual events that they appear to be archive footage.”

Besides the film, the campaign includes a digital interactive platform where the consumer is able to learn more about the car and “like” or share his or her favorite attributes.